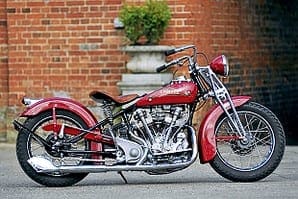 Just 125 or so Crocker V-twins, designed to top 100mph and defeat the Harley-Davidsons and Indians of the day, were manufactured between 1936 and 1941, since when they’ve become the Holy Grail for American classic motorcycle enthusiasts.

It is believed that just 68 examples of the V-twin survive today. James Robinson, editor of The Classic MotorCycle, said: “This is an incredibly rare opportunity to see three Crockers together in this country. They were hand-made in low numbers for a short period of time and not all have survived.”

Known as the ‘Duesenberg of motorcycles’, Crocker is the definitive American motorcycle – handmade, powerful and fast. Very much a Hollywood ‘hot rod’ bike, Crocker was created in, and shaped by, the culture of prewar Los Angeles, California, by former Indian distributor Al Crocker. When it debuted in 1936, the upstart founder brazenly challenged Harley-Davidson, boasting of superior technology, performance, handling and raw power. In fact, Al Crocker famously advertised that if any of his bikes was ever beaten by a stock Harley, he would refund the owner’s money. (No refunds were ever requested.)

As a bespoke machine, each Crocker was made to the specifications of its buyer. This expensive and time-intensive approach meant that quality remained high but production output low. Total Crocker numbers never exceeded more than 125 units before the Second World War forced the firm’s closure.

They will be sold at the Bonhams Auction of Exceptional Collectors’ Cars, on Thursday (dedicated to motorcycles) and Friday (dedicated to cars), August 16 and 17 at Quail Lodge in Carmel, California.