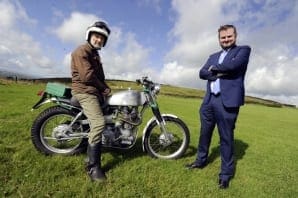 Graham Lampkin, 62, from Lancashire, is planning an off-road trip through Spain next year in aid of Cancer Research UK – taking in as many towns beginning with the letter L.
“I did a similar venture last year,” says Graham, “riding off-road where possible up to the Shetland Islands. It was a great success, raising over £3000 for the charity. That really spurred me on to do more, so I thought we could do something similar but slightly further afield.
“The plan is to take the ferry to Northern Spain, then riding my classic Royal Enfield on as many unsurfaced roads as possible over the Pyrenees, into France, then heading north to the Channel ports and home, via towns beginning with ‘L’.
“Hopefully, this is going to be the ride of my life, and if we can beat the £3000 we raised last year, it will be brilliant.”
Graham has enlisted the support of his local MP, Andrew Stephenson, who has pledged to give part of his pay rise in sponsorship. He said: “It’s really intriguing and impressive feat which Graham is attempting and I’m delighted to give it my full support.”
Graham will be joined on the trip by fellow members of his local club, the Red Rose Classic MCC, who organise classic motorcycle trials across Lancashire. They will be paying their own cost so that all the donations go to the charity.
See www.lampygoes2Lnback.co.uk