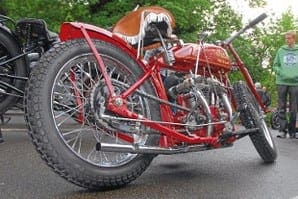 Members of the Girder Fork and Classic Motorcycle Club suffered a serious jubilee drenching on the evening of June 6 when they gathered for their annual Big Bike Night – with added bunting and flags supplied by show winning Excelsior owner Harry Dowson.

Held at Steeton Hall, in Keighley, West Yorks, the punters streamed in, the hog was roasted and eaten and much ale was quaffed. The Yorks Air Ambulance and the local Sue Ryder hospice shared £500 of donations and a seemingly endless raffle. Colin Appleyard provided the sound and gazebo but thankfully the rain abated. There was a variety of machinery, including a diesel Royal Enfield, loads of Triumphs and Mr Lodge’s Best Multi winning 500cc Norton Dominator. Best single went to Phil Proctor’s Honda XL250, a fine little 98cc two-stroke won best ‘Girder Forker’ over the brace of Indians, one them a gorgeous Wall of Death job.

The Kawasaki Z900 attracted much attention and the lovely Ariel trials was beaten to the competition trophy by a 1979 OSSA TR, and Philip Petty’s show winning RD125 Yamaha did the race bike thing. Andrew Varley’s BSA A10, reminiscent of the early 1970s custom scene, had simple custom touches and looked beautiful. 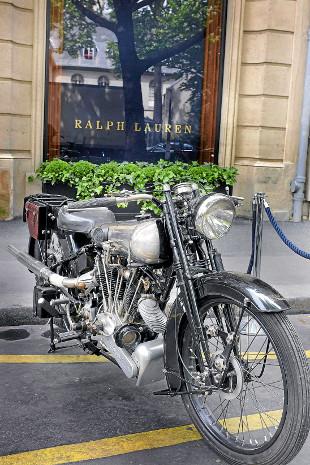 • CBX Riders Club
It all began in 1992 when CBX enthusiasts Pete and Rusty Broad placed an advert in the national motorcycle press, inviting anyone with a six cylinder CBX Honda to join them at the National Motorcycle Museum, one Sunday. The turnout was impressive and from it was born the CBX Riders Club UK.

Many present on that day are still active members of the club and the membership numbers now exceed 500.

The intention is to celebrate their 20 years together with a re-enactment at the National Motorcycle Museum on September 23, from around 10am.

It is hoped that CBX owners will bring their machines from all corners of the UK and Europe too. It’s an informal affair, as was the original meeting, but Pete Broad, retired former chairman and lifelong honorary president is coming over from France and after his speech he will hand out the concours trophies. The machines will be segregated into their respective categories – Models Z, A, B, C, Specials – frames and paint jobs etc., so everyone can be photographed.

All details of regional branches, events and more besides can be seen on the website www.ukcbxclub.com

• NOC Manx Reunion
The Norton OC 2012 Manx GP Reunion, will be at the Shore Hotel, Laxey on August 28 from 3-6pm. BBQ. www.nortonownersclub.org