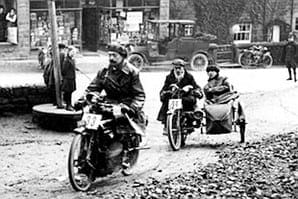 The start in Sheffield, at 8.30am, drew a huge crowd, which was kept in check by RAC guides and the Sheffield police who, said The Motor Cycle, “were on duty at the start and finish and did their duty nobly”.

The motorcycles and sidecars were lined up in the exhibition hall overnight, with no one permitted to fire up their machine until they were outside on the starting line.

In fact, the early miles out of Sheffield were all uphill, and a rider called McMullen snapped the belt fastener on his Blackburne trying to make the ascent out of the city.

The route took in Little Switzerland; where riders had to observe a 6mph speed limit according to the route card, but 12mph on the road sign – and Sir William Hill; where the road surface deteriorated significantly and riders came to grief on loose stones littering a tight downhill hairpin.

Anchor Knoll, prior to the glorious climb to the Cat and Fiddle, saw competitors encountering a farm cart descending the hill which, “caused a lot of trouble and all passenger machines had to be held up.” Lunch was served at the Hydro Hotel, Buxton, followed by a mix of “pretty country roads and rough and slimy byroads” to Matlock.

Slack Hill, near Matlock, saw the another test – where competitors had to stop and start their bikes on a gradient of 1-in-7, but offered little challenge. Then at Owlers Bar, a brief inspection of each machine was made by two judges who awarded marks for both the cleanliness of the machines, and that of their riders, while the final event of the trial was the taking of times as the riders rode in past the Wheatsheaf, Ecclesall.

The Motor Cycle gave the event five full pages of coverage, underlining how importantly it viewed the ACU Spring Trial – but didn’t carry any results. The ACU, in its wisdom, decided it wouldn’t compile them until the following weekend!

? View all the images in the March 2014 issue of Classic Bike Guide