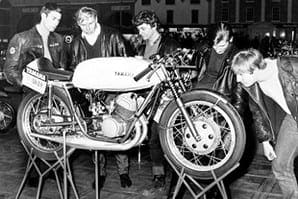 February 23, 1933, ‘Sartor’ was exploring the premise that for too long the line had been drawn under machines of 250cc and anything less, particularly machines of 150cc and 100cc “had been left to the tender mercies of the average rider for development”.

Sartor however argued that the most startling feature of the smaller class machines was their ability to keep going under extreme conditions without tiring.

“Your 98cc machine many not provide an extravagant performance, but it will do its work well and without complaint, and it will give you full value for the extraordinarily small capital outlay,” he suggested.

Sartor calculated that allowing for depreciation and around 5000 miles per year, the cost to run such a machine was 2⁄5d per mile – including road tax of 15s a year, third-party insurance of 30s, petrol consumption of 130mpg and oil consumption of 2000mpg.

These figures, he said, were not the invention of a furtive mind, but based on the reality of the mileage he clocked on a lightweight (less than 100lb) 98cc two-stroke that would, “hum along merrily at 28mph with a sustained maximum of 36mph”. Sadly, he didn’t reveal the make or model of machine he rode.

Sartor must have been an advocate of the smaller motorcycle, since he also admitted to spending time riding a £30, 150cc ohv machine the previous year. Again he didn’t reveal the make of machine but said it had cruised at 35mph and had a top speed of 48mph but also returned 110mpg on fuel consumption and was so challenged on the minimal oil consumption that he struggled to measure it accurately and estimated it must have been more than 4000mpg. He reckoned his cost per mile worked out at 1⁄4d in a 10,000 mile riding year!

Sartor concluded: “There is no doubt at all that the present-day lightweight not only does its job thoroughly, but can give a performance that will surprise and convince the experienced rider of heavier metal. It is no longer to be regarded with polite amusement.”