I remember thinking that when I first saw a gutter chain on a building. Surely, a pipe is the best way to get rainwater water down from a roof? Then I saw how the chain performed in a downpour, when pipes around it couldn’t cope. Then there’s NASA’s multi million dollar ballpoint that worked in zero gravity – the Soviets used a pencil. Well, it’s a bit like that with a rigid motorcycle like this 1952 BSA B31.

One would think that with its unsprung rear, it would be both uncomfortable and also likely to be thrown off line by the smallest bump. As many will testify, neither could be further from the truth. I’m not claiming that the development of rear suspension wasn’t worth it, but it represents diminishing returns compared to the major advance of front-end springing and a decent saddle. The front wheel is trying to break contact just by steering and braking, so it’s important to protect it from bounce by sprung forks. However, if one considers the unsprung weight that a rigid rear forces on you, relative to the weight of the machine and rider (who’s sprung by the seat), then it’s not that much more than on a sprung machine.

It was a pleasure to spend some time on this BSA, thanks to meeting owner Charlie Milne at the Leven vintage vehicle rally, in Fife. Those magic initials BSA drew me to the bike along with the striking green paintjob on a tank where one would expect chrome. Only then did it dawn on me that it was a rigid. So I had to know more.

One of the first things to learn was that there was a brief period of overlap in the model history when one could actually choose rigid, plunger or swinging arm. It wasn’t just using up parts, though BSA were good at that – it was because some genuinely preferred the rigid.

As well as the story behind the painted tank (Brunswick green – matched from the unfaded paint under the tank rubbers), the badges have a tale to tell. Charlie sent them for re-chroming with many other parts. Stripping off old chrome involves electrochemical processes that should not affect the base steel while dissolving the chrome, nickel and copper layers, but neither Charlie nor the plater realised the badges were bright tin on brass. The effect of the chemicals was dramatic – the badges disappeared! After a bit of searching (it was difficult in 1988) and some correspondence with Bob Currie, the then editor of The Classic Motorcycle, Charlie eventually found some new ones in Wales. 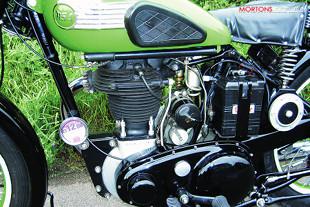 Charlie had wanted a rigid B31 for some time, and eventually found that dealer Jimmy Hendry, in Kirkcaldy, had one in the back of his showroom. It was in a bit of a state – one of its uses had been to circuit Knockhill track, between races, with its tyres punctured by nails demonstrating tyre sealant.

It had been in the Hendry family since new, with the original logbook to prove it. Sadly, one of its original attributes had gone – Jimmy’s wife had sold off the original number and it had been issued with an ‘A’ suffix. Charlie managed to negotiate a spare battery in compensation, and shortly afterwards the DVLA became more keen to allocate correct age-related plates. So, after a quick visit to the Dundee office, SSK 142 she subsequently became (SK is a Caithness district plate).

Noticing the ZB prefix on the engine led me to Brian Pollitt, the BSAOC’s numbering expert. There seems to be little logic to the prefix scheme. For some years, the prefix letter incremented, but not all. There are also big jumps, and strange cases such as every 1949 model had a Z, except D1 Bantams, which had a Y. Oddest of all are the handwritten original factory books with duplicate numbers, either a mistake in the books or genuinely reflecting that someone stamped the same number twice! 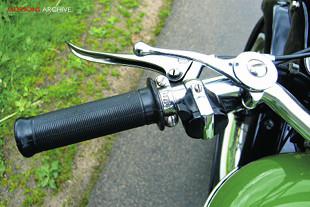 Anyway, numbers aside, Jimmy Hendry took a lot of persuading to sell the bike, but he eventually relented in 1987 and Charlie became the proud owner. Apart from the tank badges, its restoration was straightforward. The Jones/Dunlop rims are original, and one benefit of being unchromed was to allow them to be blasted and painted back to pristine condition. Charlie painted the coachlines with Humbrol enamel. Local expert George Spence did the wheel building. The only other items required were a new headlamp shell and a new saddle, to replace the Lambretta item fitted at the time. Fortunately, the correct cat’s eye headlamp glass was in fine condition. Charlie has put a fair bit of stainless hardware into the rebuild, which might offend the purists.

The rigid BSA frame is a pretty simple affair, and this one was straight and original. It has a bolted-up rear, is easy to handle and responded well to blasting and powder coating, likewise the cycle parts. The lines are just right, the engine tapers through the gearbox/oil tank to the triangular toolbox, all following the straight and simple rear frame tubes. The engine is a visual treat in its own right – with the iconic shaped timing chest of pre-unit Beeza singles, including the Gold Star. The polished alloy pushrod tube contrasting against the black iron barrel and head is also satisfying. The engine and gearbox lived up to BSA’s reputation for durability, needing nothing more than the usual rebore/piston and a complete set of bearings. The big-end was a specialist job because of the realignment requirements, but at least it’s straightforward with a simple bolted-up crankpin. The integral rocker boxes make the top-end oil tight, and in general the engine is good in that department. Charlie admits the primary drive has a few weeps here and there, but the design of the oil seal is hardly conducive to keeping the slippy stuff in. 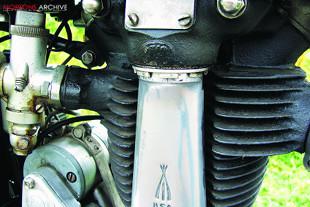 The electrical system is simple too. Charlie had the original magneto rebuilt 20 years ago by FTW in Sheffield, and it’s been fine from then on. The dynamo was duff so Charlie acquired an exchange unit. The rest of the charging system is pretty much up-to-date with a V-tec electronic regulator inside the original unit’s case, under the saddle and a 6v Cyclon gel-cell battery, which holds a charge over long periods and completely does away with the ruinous effects of spilled electrolyte on paint and chrome.

Out on the single, one notices straightaway the comfort and springiness in the saddle. It’s low, but there’s no discomfort in tucking my legs up onto the footrests. The 50s isn’t so long ago, so there are no unfamiliar bits on this motorcycle. Even the long advance-retard didn’t need fiddling with on the softly tuned engine.

Some machines are genuinely difficult to start, sometimes it’s inherent, other times it’s the condition of the machine or just a knack. This Beeza was as easy on the foot as expected from a 6.5:1 compression ratio, and Charlie’s thorough assembly and maintenance is to be applauded. The result was an easy and undramatic easing into life. The clutch was light and showed no sign of dragging, so off we went. Small Heath’s pre-unit boxes have a long-travel action that needs to be followed through with the foot until the gear is fully engaged. Generally they’re smooth and this one was no different. 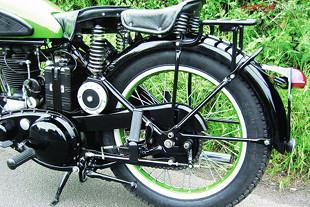 Apologies to those who know this but it doesn’t take long to figure out what’s the most vital component on a rigid – the springs on the seat. Close second on the rigid’s essential list is decent front forks – another tick in the BSA box – good damping and just the right springs. So, with all the basics sorted, I’m soon cruising along the back roads. Actual power is pretty academic but it’s more than sufficient, and delivers over a wide spread, so gear changing is when you feel like it and it suggests taking a higher ratio rather than screaming out an imperative.

On back roads, speed is limited and there is little drama from the brakes, but they do the job well, again down to Charlie’s careful renovation and adjustment – no frayed cables or over-centre actuating levers on this machine. A classic motorcycle is much more than the sum of its parts. The older and more basic, the more it’s true. So, once you get a bit familiar with the rigid B31, the subliminal aspects become more significant. It feels so sorted-out, the result of long production runs and good basic design.

Remember, it seldom pays to be too rigid in your thinking. The B31 is living, bouncing proof that a solid rear-end machine works very well – and a pleasant surprise is, of course, the best one of the lot.