The exclusive images were taken as Norton put the finishing touches to the prototype of its new twin-cylinder Domiracer at its Donington Park headquarters.

Just fifty Domiracers will be built at a price of £24,000, and you’ll have to pay an extra £2000 to get the bike made road legal through a process called Single Vehicle Type Approval. 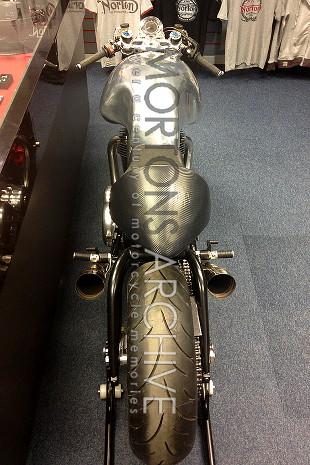 The bike is the brainchild of former Triumph employee, and now Norton’s technical design genius, Simon Skinner. He said: “I wanted to build a bike that was the pure essence of a café racer, with no expense spared. The kind of bike that I would build if I took home a Norton Commando and stripped it down to its bare essentials.”

The bike apes the look of the sixties Domiracer right down to the style of the exhausts, but it wasn’t meant to be a copy, it is merely the combination of Norton CEO Stuart Garner and Simon Skinners vision for a modern café racer that harks back to the golden era.

Using Ohlins forks, Brembo brakes and Ohlins rear suspension, the Domiracer promises fine handling. And although on the surface it may appear to use the same chassis as the modern Commando, it’s actually all new with a curved backbone rather than the Dominator’s straight bar running alongside the bike. The curved swingarm is new, and the further you get into the bike you can see details like the footrest heel guards which Skinner designed to look like they’re floating in mid-air, with bolts neatly screwed in from the back.

The seat unit, mocked up here, will be proper carbon fibre, along with a carbon fibre airbox to help the bike mix old with new. The handmade exhausts also ape days gone by, and the top yoke is machined out of billet aluminium in Norton’s factory.

Full technical details of the bike are not yet available.

For more info go to www.nortonmotorcycles.com