It’s fair to say that over the past few years there has been a return to traditionally styled motorcycles, albeit many with a thoroughly modern appearance. However, retro style has become ‘chic’ in aspects of daily life, with everything from cars and clothes to refrigerators and radios all taking on a look that just a few years ago was classed as merely old fashioned.

Royal Enfield of course is the exception to every rule, having been stuck in the time warp which was India, for the past half a century. While the rest of the world’s manufacturers went power crazy, developing bigger and more ridiculous motorcycles, Royal Enfield carried on regardless, simply meeting a demand and filling a need with its simple technology, churning out Bullets by the lorry load. 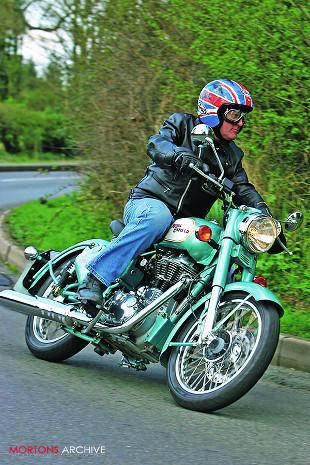 Over the last few years, the basic Bullet has seen a few upgrades and with investment from parent company Eicher Engineering has come a greater quality control, resulting in not only a better machine mechanically but also a much better finished machine too.

As the world has fallen hook, line and sinker for the global warming line, exhaust emissions have become a means for governments and bureaucracies across the world to both expand their taxation nets and also to be seen as being ‘green’, presently a very trendy and potentially vote winning position. As such, increasingly stifling legislation has meant that that Royal Enfield has had to fall in line, the result of which was the loss of the carburated 350cc Bullet last year. A new 500cc lean burn engine was introduced, then fuel injection etc, and then finally an all new engine.

What’s more, the company decided it was an ideal time to launch a new range, taking the retro look a stage further – enter the Bullet Classic.

The Classic was shown at last year’s NEC Show, orders came flooding in, and presently Royal Enfield is barely keeping up with the demand. Having been privileged to be invited to the UK press launch and spend a day with a Classic, I can see why.

The Classic is a new machine in all respects, yet gives a genuine feel of all that is enjoyable about riding a 1950s machine. The frame is new, and all the cycle parts that go with it. It comes in traditional black, metallic red or a turquoise green, all with the cream tank panel and red and gold coach lines. The finish is excellent on the metalwork, the paint and the polishing of the cases. 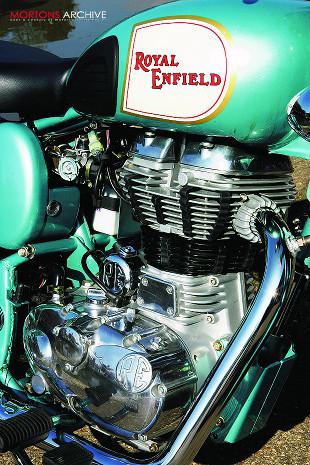 Styled unashamedly on the late 40s, early 50s machines with a single saddle, the first thing noticeable when astride is the low seat – just 31in (790mm) – what’s more the seat is quite large, more than adequate for, shall we say, ample backsides and despite its short rear springs, the take up over uneven surfaces is first class.

Wheels are chrome plated steel and both 18in, which also helps lower the riding position, and some thought has gone into the placing of footrests in relationship to both the saddle and the handlebars, so for all but the most extreme sizes of motorcyclist, the Classic is ergonomically spot on.

The front wheel sports a single 11in disc, which works exceedingly well and the six inch rear drum works just as expected, locking the back wheel with a firm press of the right foot. The front forks are nicely damped, taking everything the Northamptonshire back roads could throw at them without any harsh reaction, likewise the rear gas filled shock absorbers, which, in cahoots with the sprung saddle made for a very comfortable ride.

Of course, it’s the engine unit which is most important and Royal Enfield has achieved a perfect balance of modern and traditional, which meets the requirements of both the classic motorcycle enthusiast and current legislation.

Externally, the engine cases have been designed and polished to resemble the 250cc Clipper and what could pass as a magneto is actually the starter motor. The unit gearbox has five well spaced gears, operated by the left foot and the seven plate wet clutch is light and makes for gentle and admirably quiet gear engagement. The induction is via electronic fuel injection and despite the long barrel silencer having to meet both noise and emissions levels (it contains a catalytic converter) it gives off a very satisfying and archetypal British single bark, especially when wound up on the road.

'The ignition is naturally digital electronic and the sound at tick-over is instantly recognisable as Royal Enfield – after all, the bore and stroke of the new engine is 84 x 90mm as per original'

So, switch the key and wait a second or two for the fuel pump and other engine management goodies to do their check, and then thumb the right-hand button. The ignition is naturally digital electronic and the sound at tick-over is instantly recognisable as Royal Enfield – after all, the bore and stroke of the new engine is 84 x 90mm as per original. That equates to 499cc but there the similarity ends because despite still being push rod operated the lean burn head has hydraulic tappets and a compression ratio of 8.5:1.

Out on the road, the Classic is a delight to ride, capable of plonking in a high gear through narrow villages, while easily capable of holding its own on fast A-roads. Maximum power is around the 28bhp mark at 5250rpm and the maximum torque of 41.3Nm comes in at 4000rpm, though it makes itself known at much lower revs than that and there’s little need to use the gearbox unless in a really big hurry.

Running with the traffic at the legal limit, (with still a considerable bit of speed left over too) there was a little vibration through the footrests, but nothing to worry about. My particular example had covered barely 200 miles, whereas one of the others available had done 1500 plus miles and gave forth no vibration to speak of at all. What’s more, being that much looser, it was also that bit livelier too, both on acceleration and top speed, so one can assume that as they loosen up they improve all round. 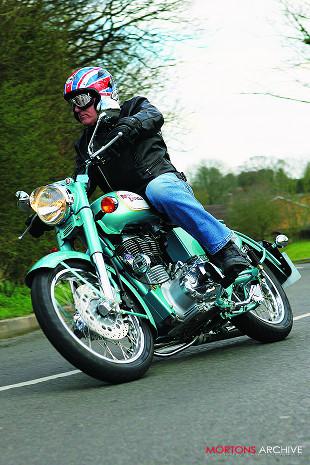 Like most modern machines, the side stand has an ignition cut out switch and this caught me out. The stand on my bike was slightly stiff and I did not put it up quite far enough to make a thorough contact with the switch and as I was riding, the engine gave a cough and a splutter and died, then refused to start. Rob, one of the Enfield mentors on the day, was behind so he took it off the side stand, put it on the centre stand. Flipped the side stand all the way home and it struck up sweet as a nut again with no further problem.

At 412lb (187kg) the Classic is nimble enough and gives a sure, planted feeling with no wallowing, or head shaking when cornered spiritedly – indeed ‘lunatic’ was the description thrown my way by big Ben Mathews, of Royal Enfield, when I decked out something on a right-hander during the photoshoot. The thing is, the Classic is great to ride and inspires total confidence to be able to do such things!

Another thing of course, is the Bullet’s famous fuel consumption, or should I say lack of it. Under ‘normal’ riding conditions, 80mpg is easily attainable, so with the 14.5 litre tank full, you should be able to cover over 250 miles, that includes a couple of litres (some 35 miles or so) reserve.

So there you have it, well finished, good handling, comfortable, lively enough, good brakes, bright lights and economical too, what more can be said. Best Bullet yet? I’ll stick my neck out here and say, yep I reckon it is.