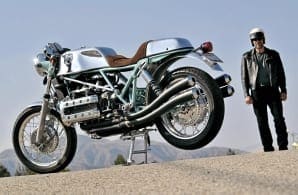 FEW EVER ENVISAGED BMW’s brick-shaped four becoming the trendy target for café builders. Then again, the K-series was never easy to figure.

Upon its release in 1983 the liquid-cooled, fuel-injected inline carried the very survival of BMW’s motorcycle division.

Or so it was thought. A unique approach offering both modernisation and Teutonic tradition, the DOHC, 987cc multi was turned then dropped until the cylinder head was riding portside and the crankshaft was spinning longitudinally; just like a boxer twin.

Thirty years later, Larry Romestant’s K1200 hybrid embraces the greatness of Spandau and a few other locations besides.