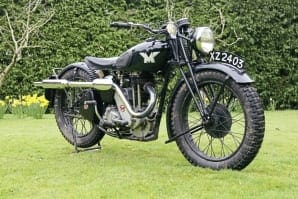 FAMOUSLY, THE SINGLE CYLINDER Matchless 350 was one of those motorcycles which made a significant contribution to the British war effort.

Heck, some folk would have you believe that this doughty mount almost defeated fascism all on its ownsome.

Once demobbed, thousands of army surplus 350s certainly got Britain back to work on civvy street in the late 1940s.

That model, the G3L, was built from 1941 and pioneered the use of hydraulically damped telescopic forks on mass-produced British motorcycles.

By now you have astutely noted that the motorcycle featured here is indeed a Matchless, and it certainly possesses just the one cylinder, and is even a 350 to boot… but those are not Teledraulic forks up front.

And that’s because the G3L’s story didn’t start with the outbreak of war, but stretches back to the 1930s when its predecessors paved the way.