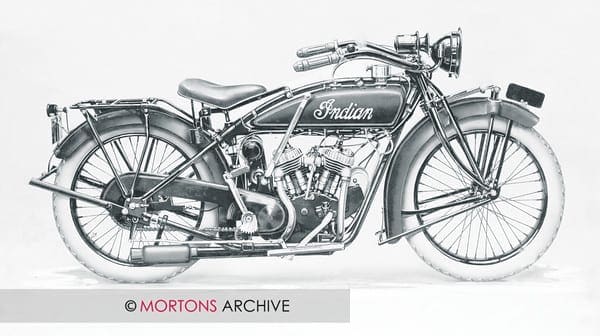 As 2019 marks the centenary anniversary of the Indian Scout – especially with the release of two new special edition models – there’s no better time to look back at the history of this iconic bike and see how it all began, way back when.

In 1919, Indian motorcycle racer and engineer Charles B Franklin designed the very first Scout, or G-20, which was introduced as a 2020 model. The G-20 was certainly a hit with US bikers due to its side-valve V-twin engine. This allowed for a geared primary drive. It also wiped the floor of 606cc engines in its original incarnation, catapulting the Scout into an industry front-runner.

The engine size had increased to 745cc by 1927 due to the growing popularity of the Excelsior Super X. A front brake had also been implemented by the following year.

After the last adjustments to the original, the 101 Scout appeared in mid-1928, introducing a new frame, a lowered seat height and an extended wheelbase. Many of the 101’s features, including the rear sub-frame and wheelbase, came from the Indian 401. At the time this was still in development.

The 101 Scout offered a 740cc engine and was praised for its handling, becoming the ‘bike to have’ for racers and trick riders. Despite this, it didn’t have a particularly long production run as the Great Depression pushed Indian to the point of bankruptcy, eventually leading the company to be bought out by the DuPont family.

By 1931, to save on resources and cost, the decision was made to design a more economic frame. With some design changes, the new frame was used on Chief and Four. They were the then-latest models in the Scout range, ending production on the 101 Scout.

The following years witnessed a wide variety of designs enter the Scout family. This included the Standard (1932-1937), the Thirty-Fifty (1934-1942), the military versions developed for WWII, and the most recent 2015 Scout, plus, the new special edition bikes: the Scout 100th Anniversary and the Scout Bobber Twenty.

Only 750 of these bikes are available. The 100th Anniversary edition’s design is reminiscent of the 101 Scout. It dons the memorable Indian motorcycle red paint with gold trimming to complement the anniversary badge. It also has a leather solo seat, luggage rack, black wire wheels and beach bars.

The Bobber, on the other hand, pays homage to the original G-20. This includes 10-inch Ape Hanger Handlebars and an ergonomic floating saddle, with some versions having an anti-lock brake system.

The Scout lineage has certainly become a household name over the years, making this centenary anniversary a well-deserved one.

Make the images shown here your own by visiting Mortons Archive and discovering millions of fantastic motorcycling images.

We’ve delved into the illustrious Mortons Archive to give you a glimpse into the use of motorcycles in WWII. See the full article here.