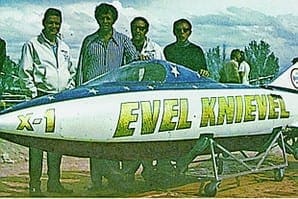 Knievel was undeterred and hit the big time a few months later with a leap over the fountains at Caesars Palace in Las Vegas.

Five years later, in December 1972, Evel bought his own canyon in Idaho and the jump was on. The steam-rocket powered Skycycle was built by Doug Malewicki who’d also been part of the Polaris and Apollo projects. The 17.5ft long Skycycle was designed to reach a maximum speed of 350mph at 1000ft altitude.

The plan was for Knievel to ride the rocket up a 450ft long asphalt-covered launch ramp and as long as he achieved the required 117mph by the end of the ramp, he’d make the leap across the canyon. No one was quite sure whether the Skycycle X-1 was aircraft or motorbike, but it did have a couple of wheels and handlebars too.

When the assembled press corps at the launch asked the obvious question, why was he going to do it? Knievel’s reply was: “Because I opened my big mouth and said I would.”

The jump finally took place on September 8, 1974 in front of a huge live audience. It was also screened live in cinemas across the US. By this time the Skycycle X-2 looked more like a rocket than a motorbike and was launched like a rocket too.

Unfortunately, the rocket’s drogue parachute deployed just after launch, meaning that although the Skycycle cleared the canyon, prevailing winds and the extra drag from the chute dragged it back into the canyon.

? See the video on CBC-TV