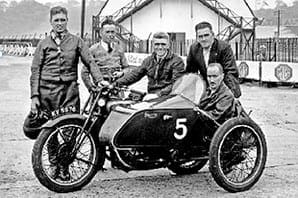 Tucked away in the bottom corner of an end-of-1933 season Brooklands race report in The Motor Cycle was a much smaller story with the headline: ‘New vertical twin shows its paces – Brooklands test of the 654cc Triumph: sixty miles an hour for 500 miles’.

The bike in question was Triumph’s vertical twin, designed not by Edward Turner but Val Page and called the 6/1 – a parallel twin with a bore and stroke of 70 x 84mm that featured a 360º crank, with its flywheel outboard of the crankcase in the primary case. The engine ran backwards with primary drive via expensive helical gears.

This is how The Motor Cycle reported the speed trials: “The final tests of the new 654cc vertical-twin Triumph were concluded some months ago but a public demonstration of high speed reliability was carried out at Brooklands under the supervision of the ACU.

“After the conclusion of the International Six Days Trial, the vertical-twin sidecar outfit used by Harry Perrey was stripped for examination. Everything appeared to be in such perfect condition that, after a thorough clean out, the engine was re-erected as before. No change was made to the compression ratio of 6:1, and the sidecar used in the trial was re-attached.

“Arrangements were made with the ACU to observe an attempt to cover 500 miles in 500 minutes. On the morning of the event, fog lay over Brooklands in a damp blanket and from 8am until 11am, owing to the visibility being so poor, and a delay through a valve-stem cap coming adrift, an average of only 56mph was maintained.

“Fortunately, the fog lifted and the Triumph had plenty of speed in reserve; it proceeded to lap at around 66mph and the average was pushed up and up until 500 miles were completed, in eight hours and 17 minutes. But for the fog, the margin would have been far greater.”

Success in the Brooklands speed trial earned Triumph the Maudes Trophy (a once annual award presented by the ACU for observed motorcycle endurance tests), but the bike was never a big seller and was scrapped in favour of Turner’s 500cc Speed Twin, which was launched in 1937. Page, though, went to BSA and was responsible for design and development of the A10 twin.