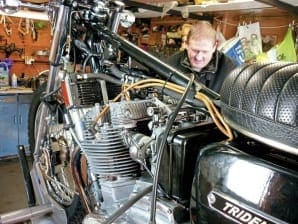 Loads of ancient Brits have returned from overseas, ripe for a rebuild.

This T160 Trident was an easy job

Produced between 1968 and 1975, some say that the Trident – the last big throw of the dice from the British Motorcycle manufacturer NVT (Norton Villiers Triumph) – was too little, too late.

The production figures tell their own story.