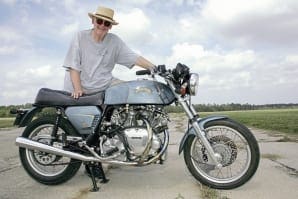 Both engines were the result of redesigning an existing single-cylinder engine into a twin, both companies began their motorcycle production using someone else’s engines, both companies enjoyed success on the racetrack and both Vincent and Ducati produced motorcycles that are viewed by their fanatical owners as so much more than just mere machinery.

The founding of the two companies are, however, some 22 years apart.

The first motorcycle to bear the Ducati name was produced in 1950, the Cucciolo (Little Cub) had a 60cc four-stroke engine made by SIATA in Turin, and after buying the bankrupt HRD company in 1928, Philip Vincent began making motorcycles using his patented cantilever frame and a proprietary JAP 500cc single-cylinder engine under the Vincent HRD name.

Both Ducati and Vincent later made their own distinctive single cylinder engines, Vincent’s 499cc Meteor/Comet being doubled-up to produce the 998cc Series A Rapide V-twin in 1936, a well documented serendipitous act that, according to Vincent folklore, was achieved by Australian engineer, Phil Irving, when he accidently placed one reversed blueprint of the 500cc Comet engine over the top of another drawing of the same engine and noticed that the resultant faux pas looked like a ready-to-rock V-twin.