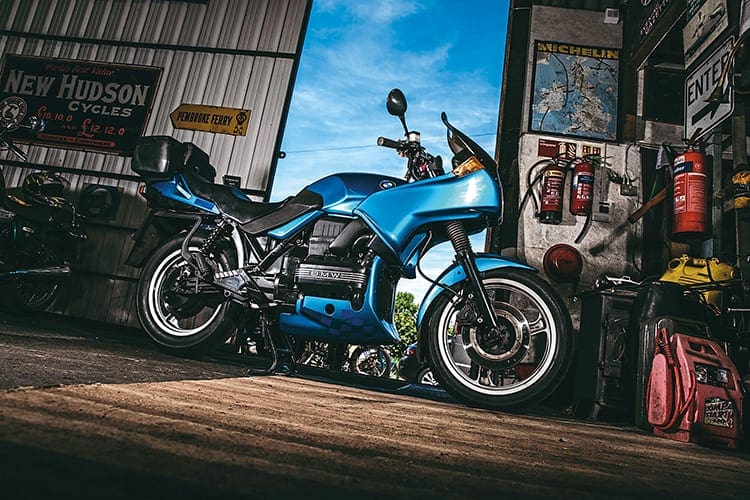 IT’S A MOTORCYCLE that will easily clock up more than 100,000 miles, burn up the motorways, autoroutes and autobahns at impressive speeds, carrying two with ease, along with luggage. And you can find one for less than the price of a Chinese 125. Whether thought of as an 80s technological marvel, the ultimate cheap tourer or superlative winter hack, the mystery about the BMW K75 is why everyone doesn’t have one in the shed.

The K75 was in production from 1985 to 1995 and at the time of its introduction, the K75 was BMW’s least expensive motorcycle. Developed alongside the K100 fours, the three-cylinder K75 was delayed by a year, as BMW wanted to cement the concept of K-series in the minds of the bike buying public. They needed to, as the K-series launch had caused a wave of outrage from BMWs long term fans, angered by the dramatic dropping of their trademark flat twins. The 740cc K75 engine was an inline DOHC triple with a big shaft drive. It had the same bore and stroke as the K100, and was, essentially a K100 with the front cylinder lopped off, fitted with a 120-degree crank and balance weights added to the water pump accessory shaft. This made the K75 even smoother than the K100. The K75’s engine was given different valve timing and a higher compression ratio, the combustion chambers were redesigned, the intake manifold was shortened, and the exhaust system was retuned. The K75 engine produced 75 hp. The styling of the first K75s is one of those things you either love or hate.

By reducing the length of the engine in the process of turning it into a triple, BMW were able to put the front engine mounts further back with the down tubes at a different angle. Otherwise much of the rest of the bike was common across the range. The K75 had the same wheelbase, seat height, and steering geometry as the K100 and 80 percent of the K75’s parts are interchangeable with the K100; however the K75’s radiator and aluminium fuel tank were smaller than those on the K100.

There were five K75 models available for UK buyers, the naked K75, the K75C which had a cockpit fairing, the K75S, with a sports/touring fairing and the K75RT with a full touring fairing. The K75, especially the RT, is a big plot to move about and will take up a lot of room in the garage. Some dealers, notably Ongar motorcycles, created the K75RS using the fairings and other equipment from the K100RS, but this was never an official BMW model. A K75s can be a bit of a handful to heave about at a standstill for the short of stature or those with a less extensive inside leg measurement, but lowered seats are available. They are sure footed beasts however, and once rolling will go where they are pointed with a little effort.

The S and RT versions have anti-dive equipped front ends, a rear disc brake and 17-inch rear wheels, whereas the others have a single leading shoe drum brake and 18-inch rear wheels. The later RT versions had an adjustable windscreen that could be raised and lowered. Taller riders complained of their helmets being buffeted by the wind, and taller screens were made available. Finish is impressive, with good thick coats of paint and minimal amounts of chrome, as BMW preferred to use stainless steel. While by now the plastic may have discoloured, the fairing and body panels are good and thick. The K75 is incredibly smooth and while BMW might have dropped the twin, they had not dropped their attitude to quality control. The bike is well engineered, and BMW at the time majored on rider comfort rather than out and out top speed, reasoning perhaps that there’s no point in an extra 10mph if it leads to a session at the chiropractor.

The K75 is one of those motorcycles that just keeps going. There’s nothing in the way of a powerband, you just keep changing up until you run out of road or skill. It’s smooth, and it handles well, in a typically staid fashion, has reasonable fuel consumption and the shaft-drive lends itself to providing excellent engine braking. Early bikes have basic Brembo brakes, while later models have BMWs ABS system. This can occasionally fail, and it’s not uncommon for owners to disconnect it if it becomes troublesome, with the warning light bulb removed to pass Mots.

BMW used a lot of tech derived from their car range, and there is, naturally, electronic ignition and a fuel injection system, which was a lot more successful than that fitted by Kawasaki to their fours. Fuel is pump to the injectors by use of a pump, mounted inside the fuel tank. Because the tank is aluminium its not as prone to rot as it’s peers, which do rust badly, though whether this is due to ethanol in petrol or simple lack of use is open to debate. The aluminium can still break down and pinhole however, if you are unlucky.

The K75 isn’t a sports bike, not even the performance S model. Rather it’s a big and comfy sports tourer. There’s something rather attractive about the idea of having a bike you can jump on at a moment’s notice and be in Marseilles in 48 hours. The standard bike has a nice riding position; good bar/seat footpeg position, plus luggage capability. BMW luggage of the period only fitted BMWs, so there’s a good chance it will have stayed with the bike.

The bucket and shim valve clearances can be adjusted without major dismantling, and as long as you keep the oil clean and give it a good ride once in a while that should be enough to keep it in trim. Huge mileages are possible and don’t be scared off by them. BMW owners as a rule tend to look after their bikes, and having 90,000 on the clock means it’s just about run in. Why hasn’t your humble scribe got one, if they are so good? Simple really – there’s no room in the garage. Though if anyone wants to swap one for a Honda 500 or a BSA 250, do get in touch.