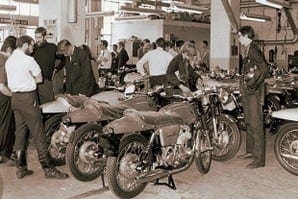 The Boston Consulting Group report, the deciding factor in the Government's refusal to give further aid to NVT, is a comprehensive look at how the Japanese achieved their astonishing dominance of the world motor cycle market, and how decisions taken by British manufacturers, mostly to achieve only short-term profitability, failed.

The consultants give three possible strategies for NVT:

1. A low-volume, high premium specialist approach (15,000 to 20,000 units per year) selling at 30 to 40 per cent above the Japanese and manufactured by traditional labour-intensive methods.

2. A high-volume, low premium approach (70,000 units) at a price premium of 10 to 15 per cent, using modern capital-intensive production methods.

3. An intermediate approach (as in the case of BMW). This would mean 35,000 units per year, two models only, using enough modern machinery to ensure a high-quality, reliable product. 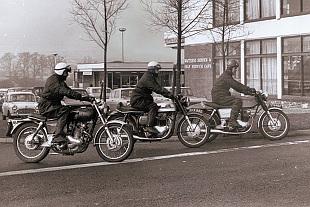 What happened to the British industry with frightening speed, says the report, is that it retreated into the small yet still profitable area of large-capacity motor cycles, believing this was the best way to ward off the threat from Japan at the lightweight end of the scale. It also had the mistaken idea that the Japanese would never be able to build big motor cycles.

Unfortunately, while the Japanese industry continued to expand, and eventually dominated the large-capacity motor cycle market as well, British firms had their backs to the wall and had become, by their own choice, too small to mount any further offensive.

While British firms were looking at short-term profit, the Japanese were looking further ahead. In America, they happily suffered losses for long periods during the 1960's while they built up complete market penetration. Once that was achieved, they had the sheer volume of production to enter an area of big profitability.

The Boston Report says that ‘segment retreat strategies (ie big bikes only) can produce profits for quite long periods, but are nearly always disastrous in the long run.

Difference
There is a vast difference between motor cycle output figures per man year in Japan and Britain. At Honda's Suzuka factory, the figure is around 350, compared with 18 at Wolverhampton. Small Heath's figure is only 10, but to be fair this is because Wolverhampton buys in more components to start with.

In the UK, says the report, the factory buildings contain mostly old general purpose labour-intensive equipment. At Wolverhampton, possibly 60 per cent of the machine tools are more than 20 years old. ‘The equipment is not capable of low-cost high volume production nor is it ideal for producing parts with the sort of close tolerances necessary for a reliable final product.’

Japan, by contrast, has the basic philosphy that high volumes per model provide the potential for high productivity, and so use capital-intensive, highly-automated techniques.

At the metal-forming stage, good use is made of high-pressure die-casting, and in machining operations rotary index and in-line transfer machines are commonplace.

But inline transfer machines are also used by BMW, whose output is only 25,000 motor cycles per year. Their approach – the third alternative suggested by the Boston Report for a relatively small British industry – is to find a market niche by offering really high quality machines and using a certain amount of sophisticated and expensive engineering.

It is interesting to note, however, that even this select little corner is about to be invaded by Honda's 1,000 cc Gold Wing, and that BMW are about to announce a water-cooled flat four this autumn.

NVT's chairman, Mr Dennis Poore, has already attacked the Boston Report as "too pessimistic." "Sales of NVT bikes are – much better than they have assumed," he says, "and they have not allowed enough for the impact of a new generation of British motor cycles like the. Challenge.

"The history of decline of the British industry was the reason why NVT was formed in 1973."