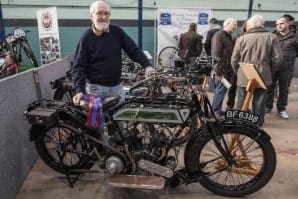 The Carole Nash Bristol Classic MotorCycle Show, which was hampered by flooding in Somerset last year, came back with a bang for 2015 and the sun shone as Charterhouse Auctioneers and Valuers racked up sales totalling more than £250,000 in its debut Bristol bike sale.

Exhibition manager Nick Mowbray said: “We are delighted with the two days of the event and many aspects exceeded our expectations, particularly the auction which was a resounding success.”

Among the many highlights was a Vincent Black Shadow motorcycle which sold for £55,000 while several barn-find restoration projects were snapped up including a 1932 Norton machine.

Charterhouse will host another auction, this time related to classic cars, at the same Somerset venue this coming weekend as part of The Footman James Great Western Autojumble.

It was also a weekend to remember for Dave Joyce who picked up the prestigious Best in Show award for his 1914 Sparkbrook Roadster while the Rudge Enthusiasts’ Club took the top prize in the club stand category.

Dave said: “All I had of the bike originally was the frame which was fished out of a lake opposite the garage I used to work in. It had some damage so I suspect it was in an accident; the gearbox and engine were saved and the frame discarded in the lake. Given how rare it is, and because of the damage sustained, it took me a while to work out what it was, but once I did then I set about restoring and rebuilding it as a retirement project – along with the help of friends – and this is the result today. I found the JAP V-Twin engine at an autojumble but it was sourcing the gearbox that proved difficult. I managed to track one down in the UK but it could well be it’s the only one in the country, it’s that unusual.”

Alongside the stunning machines were a host of trade and autojumble stands as the event continued its long tradition of bringing together all manner of bikes, parts, spares, riding kit and accessories ahead of a new season of riding and restoring.

Exhibition manager Nick added: “Last year’s Bristol show was excellent, but there’s no denying it was severely affected by the awful weather conditions encountered by the region in the early part of 2014. It was wonderful to see the crowds come back in huge numbers for what is many people’s favourite two-wheel event of the year.”

Motoring action returns to the Royal Bath & West very soon with the Footman James Great Western Autojumble taking place on the weekend of February 14-15. Classic Bike Shows’ next event is the Putoline Classic Dirt Bike Show in Telford on February 21-22 and the massive annual Carole Nash International Classic MotorCycle Show takes place at Staffordshire County Showground on April 25-26. Details on all can be found at www.carsandevents.com and www.classicbikeshows.com