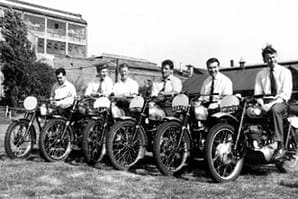 A regular prelude to the 39th International Six Days Trial was the gathering of the British teams at the BSA sports ground in Birmingham for a final briefing just prior to departure.

The idea of the meeting was to ensure all the bikes were prepped ready for the arduous six-day off-road enduro – and to ensure all the paperwork was in order. Britain was to field three teams in the ISDT in East Germany 50 years ago: a Trophy team consisting of John Brittain (499cc Royal Enfield), Johnny Giles (649cc Triumph), Ken Heanes (649cc Triumph), Sammy Miller (497cc Ariel), Ray Peplow (348cc Triumph); Jim Sandiford (343 BSA); plus two Silver Vase teams of four riders each, plus 16 privateeers.

The Motor Cycle said: “Looking around the machines one saw little new but this does not mean stagnation. Gimmicks do not win gold medals and it is folly to cast proven ideas overboard until better ones are discovered.

“Exceptions were the 348cc BSAs which now have a contact-breaker mechanism housed inside the timing cover instead of in a distributor at the rear of the cylinder. The Triumphs all looked particularly neat. Sammy Miller’s lone Ariel set a high standard in appearance as well as mechanical soundness. There is a psychological boost for the rider of a smart machine, and this aspect seems to have been observed with all machines this year.”

Jeff Smith was on hand to give the competitors some background information on conditions in East Germany, based on his visits there for world motocross events. Also present was the American Silver Vase team of Dave Ekins, Bud Ekins, and Steve McQueen and reserve John Steen.

The Brits were part of a 230 rider entry from 14 nations for the ISDT and competition for the Trophy team would come from Austria, Czechoslovakia, Easter Germany, Poland, Russia and Sweden. Including the Vase teams, there were 18 in total – with 32 different manufacturers represented. Britain actually organised the first ISDT, held at Carlisle in 1913 and had won the event 16 times up to 1963 but was going into the 1964 ISDT after a lean, winless period having last won the Trophy contest in 1953, and had not won the Vase competition since 1950.

? More iconic images are available from the Mortons Archive.