All trials riders like to make their machines as light as possible. It stands to reason, the lighter the bike, the easier it is to haul over rocks or out of bogs and the less tiring it will be to ride. But how to go about getting a light bike? Well, using a unit construction model from BSA or Royal Enfield is a fair starting point as they’re quite a bit lighter than, say, the pre-unit trials machines from either factory. The 500cc Goldie, for instance, weighed in at just over 330lb with an alloy tank, while the C15T was a shade over 260lb with steel tanks and guards. Royal Enfield too had similar weight differences.

OK, so with a unit bike there’s a 70lb weight advantage for a start and few riders competing regularly will ride a catalogue correct machine. Most will have replaced the original petrol and oil tanks with freely available alloy ones which shave valuable pounds off the all-up weight. Smaller, lighter seats, alloy mudguards – as well as handlebars and levers – all tip the scales in the right direction though the bike still will be a fair lump. And that sort of wraps it up for the easy part. 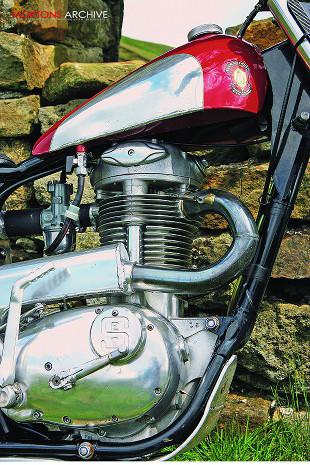 To take the thing to the next stage will need a bit of expert help from an engineer with a lathe to convert lighter hubs – usually from a Tiger Cub or BSA Bantam – then a wheel builder to lace alloy rims to them. For a lot of us, this is about as far as it goes, the all-up weight is well down and hopefully the bike is a lot better to ride. But, what if you’ve got a serious weight habit? What if you really want to carve pounds off and create the lightest possible bike? You’re going to need access to – and a bit of ability with – machine tools, welding equipment and the like as well as more than a bit of knowledge about what to do, or the result might not be quite what you wanted.

Peter Gaunt and Eric Boocock have no worries in any of these departments and their bikes are inspirations to all of us who aspire to a light machine. Both lads are regular riders and their bikes – Royal Enfield Crusader for Peter and BSA C15T for Eric – are well known in the trials world but what are they like to ride? Classic Dirt Bike was invite along to a secret test location ‘somewhere in the North’ with rocks, hills, banks and streams to try these two machines.

The word ‘superb’ is as good as any to describe what they’re like. Both are extremely well set up, as you’d probably expect from two men for whom motorcycles have been a living.

Both machines have a distinctly upright riding position, meaning the rider isn’t hunched over when going through sections making it much easier to see where you’re going. It also places the rider’s weight much more to the centre of the bike, so that the front can be gently flicked over rocks or around tight turns with very little effort. 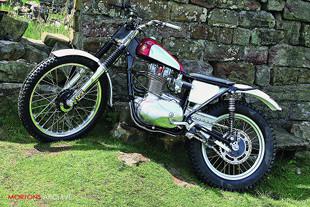 Yet, as superb as each bike is, they’re both different in their feel. The BSA has lots of low down torque helping the rider to ride traditionally – crawling along in bottom gear on the throttle, clutch fully home – whereas the Crusader has a much more modern feel. And, while it will trickle along, its peppier motor means the rider can use clutch – rather than throttle – control. Though when needed both machines have enough urge – cracking open the throttle increases speed dramatically on either bike – a novice would find the BSA motor more forgiving as it’s less easy to make the rear wheel spin. Our novice mounted on Peter’s Royal Enfield, on the other hand, might see a lot of sky when whacking open the throttle or, if the going were slick, do a lot of wheel spinning. This doesn’t make the bike bad or difficult to ride, it’s just that if either Eric or Peter were daft enough to say at the start of a trial: “Here, you ride my bike,” I’d be at home straight away on the BSA but it would be quite a few sections into the event before I settled into the Royal Enfield. At the end of the trial though, the differences would be a close run thing.

So, I’ve bounced around the secret test location – enjoying the smooth operation of the modified Roadholder forks – Yamaha internals for the C15 and Marzocchi for the Crusader – and been impressed with the performance and low weight of each machine. Now it’s time to quiz the lads as John Wilkinson takes the detail shots. 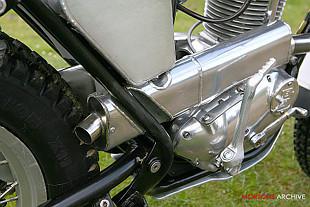 With the Crusader in front of me, I confirm the obvious with Peter. I can see the billet alloy fork yokes and alloy front hub made by Alan Whitton, Betor rear dampers, Renthal bars fitted with Domino controls – and all are much lighter than standard. “I finished off the bike about three years ago and, other than service it, I’ve not done anything really major towards development since then,” says Peter. He confirms it started life as a proper trials Crusader rather than a converted roadster but, over and above the things I could see, Peter’s bike is remarkably standard internally. “I’ve got a PVL ignition from Alan Whitton and I spent a bit of time looking through Albion gear charts and made up my own cluster with a better spread of ratios,” Peter said.

Though Peter says that the engine is standard Crusader – it even has the cast iron barrel and the capacity is still 247cc – I would guess the assembly of the components has been carried out very carefully, which does make a difference. “While the engine was apart in the early days, I Helicoiled all the tapped holes in the cases and now I can use alloy Allen bolts, which saves an ounce or two. I’m going further down this route,” he adds, admitting that he’s bought a few titanium fasteners. “It’s amazing how light that stuff is, I might even change the wheel spindles to it – they’re aircraft-grade alloy at the moment.” 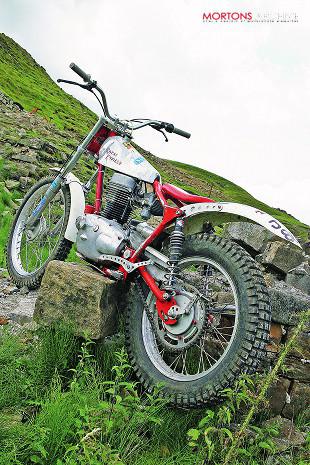 Turning to the frame, Peter tells me that he’s slimmed it down slightly from the original and taken all the unnecessary lugs off. “There’s more room for development here and that’s the next stage for me,” he says, pointing to the alloy collars on the Betor dampers. “The original steel ones are a bit heavy so I made these the other night on our Neil’s lathe.”

Of the two machines Eric’s has had the most development from the standard C15T starting point. “Mick (Grant) went with me to have a look at it when he decided I needed a pre-65 trials bike. After checking it over, he reckoned it was a good starting point, even though the bloke we got it off had been going to scramble it and modifications had been made with that idea. Once it was up and running, we found that the handling was brilliant. I mean, I didn’t really know as I’ve spent my life going sideways at high speed. It felt OK to me, but those that know said it was good.” So good in fact that a jig was made from it and a replica built in T45 tube – saving 22lb. “The forks will be lighter thanks to Yamaha internals, you can get bits for them and they work, and the yokes are BSA with Renthal bars and Domino controls,” says Eric.

“I’ve got NJB Trik Shoks on the back – they’ve a nice rose joint instead of a Metalastic bush so they always line up,” Eric continues. Looking at the bike, I can spot the light alloy hubs and brake plates – from Alan Whitton – at both ends with alloy rims laced on. “I’ve got a tubeless rear because the whisper is that tubed tyres are on the way out,” says Eric. “Most of the fasteners are metric and as many as possible are in titanium.” 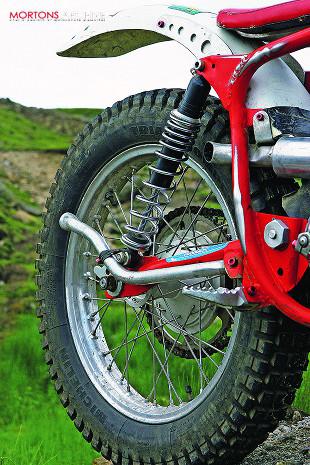 Moving to the engine, further massive weight reduction has come by fitting an alloy barrel hand made by Eddie Bull. “There’s no liner in it at all, just a Nikasil coating for the piston to run in,” says Booey. “There’s a slimmer con-rod too, which means I can have bigger flywheels without widening the engine – you noticed how it ‘plonks’ well and that’s why. The bore and stroke are different too and the capacity is out to about 280cc but it’s on a standard cam. I’ve a PVL ignition again but it’s got a fixed coil rather than one with and advance and retard”

Duncan MacDonald provided the smart petrol tank and Steve Gagg in Nottingham fashioned the oil tank. “The filler is under the seat, well out of harms way,” Eric grins, adding that probably the only thing he’s unhappy about is the carburettor. “I’ve a Concentric on as they’re easy to get but it takes a lot of fiddling with to get right. The bike runs a treat with a Dell ‘Orto on but I’d have to change it for Scotland so I run with the Amal all year.” At this point, Peter chips in. “You want a Villiers carb like mine, it’s perfect, the best trials carb ever.”

Dragging them back to current development Eric tells me that his clutch is an NEB speedway one, machined from alloy “…and weighs next to nowt,” as does the GasGas kick start and side stand. “I got sick of lying my bike over at sections, so I fitted this side stand. Granty thought I was daft for doing it – but his bike had one on the next week.” The conversation goes on between the two and it’s clear that neither bike is ‘finished.’ For instance, Peter has a big lump of alloy sitting in the workshop that will soon become a Royal Enfield cylinder. More titanium parts are planned and Peter says he’ll have to experiment with the lathe until he can turn the tough material properly. “You’ve to have the right lathe tools and the right specification material too,” he says, “but we’ll get there.” “Then you’ll think of something else to do,” adds Eric, to which Mr Gaunt says: “well, it’s a matter of development.” Indeed it is. And I’m sure that for Eric and Peter, there’s a long way to go yet.