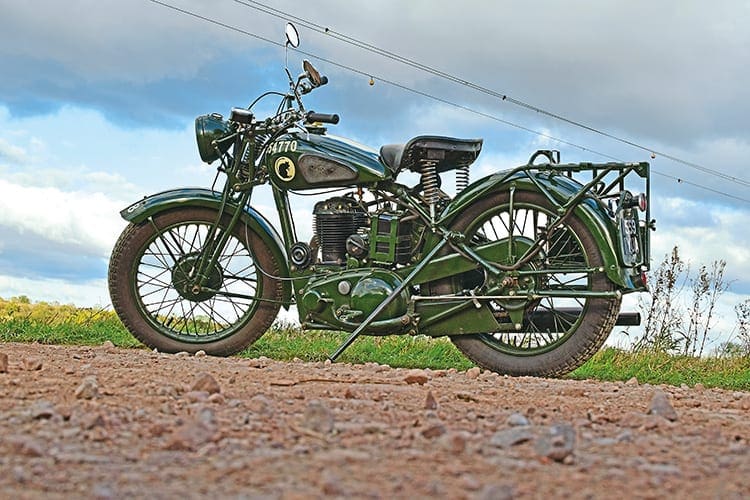 THERE ARE PLENTY of contenders for the title of ‘the bike that won the war’ and BSA’s chunky side valve single, the M20, has a fair claim to it. Created by the renowned Ariel and JAP designer Val Page, it filled the hole in BSA’s range for a solid sidecar hauler for the family man in 1937, as well as being built to a military specification, in competition with machines from Matchless, Norton, Triumph and Royal Enfield.

The M20 started out with hand-change gearbox, with the lever on the right, a rigid frame and girder forks. The bottom end design was common across the BSA range of singles, being used on both their M range of side valve and OHV heavy duty motorcycles and the lighter weight B series, including the famous Gold Star. The hand-change suited sidecar usage but was dropped and replaced with a right-foot operated lever in 1939, in a one-up-three-down arrangement.

With the M20’s massive flywheels and low compression ratio the BSA would pull away from a standstill in almost any gear, and once into top would plod along at a respectable rate. The brakes were excellent for the period, for a solo, making the M20 a respectable and practical choice for anyone not in thrall to the gods of speed. Although side-valves were slow, ran hot and were thirsty, they were also bulletproof, would run on very poor quality fuel and didn’t have a great deal in the way of moving parts to go wrong.

The M20 also got a bigger oil tank in 1939, a new toolbox and a new chrome and green petrol tank. It had a tank top instrument panel, valanced mudguards and BSA’s crinkle hub QD rear wheel, which continued in production until 1969 on many BSA models. There were front and rear wheel stands and the solo M20 could just about reach 70mph, eventually, cruising at around 45-50mph while drinking a gallon of fuel every 56 miles.

BSA realised that war was on the way as early as 1935, restarting weapons production before the Government asked them to. Although enjoying solid sales in civvy street, the M20 and its military version the WM20, might not have had an illustrious future had it not been for Dunkirk. BSA had sold the Government a batch of civilian B29 singles, but they were mostly left behind on the beaches of France. Meanwhile, BSA had created a new mount for the troops, a light and nimble machine, the B30 OHV 350cc single which would work well in poor conditions, something considered vital as many military minds were convinced any war would be fought in similar environments to the trenches of the First World War. The War Department had been impressed with the B30 and ordered 10,000 of them.

Meanwhile, the M20 was a general-purpose motorcycle while its bigger brother the M21 was to be given other workaday roles, hitched to a military sidecar. After Dunkirk, with the nation’s survival on a knife edge, the Government decided against BSA’s advice to cancel the order for B30s and plumped instead for the M20, which BSA felt had poor ground clearance and was too cumbersome and slow for use in the field. But the War Department decided the motorcycle the forces needed was the WM20, which was something of a volte-face as it had only scraped through the selection process when tested in prototype form in 1936, the military preferring the Matchless G3L and a side valve twin designed by Triumph.

But when war broke out Matchless couldn’t produce the volume, and the Triumph designs, prototypes and tooling were destroyed in a German bombing raid. BSA were already tooled up to produce a military motorcycle in the volume the Army needed. BSA built more than 125,000 of them for the services and the M20 became the longest serving model in the history of British military motorcycling, not to mention becoming the type most produced for the War Office.

The prewar military had specified additional fittings including the large 8in headlight, complete with the switch panel and ammeter, a timing-gear cover incorporating a screw-in plug permitting access to the magneto drive-pinion nut, and ‘winged’ flip up filler caps for both petrol and oil tanks – as either item was not something you would want to rattle loose in the field. There was a semi-rod operated front brake, a screw-in speedometer drive-box on the front wheel rather than the more traditional rear fitment and a 3½ gallon fuel tank. BSA could not resist including such luxuries as an alloy tappet cover carrying the BSA emblem. The cylinder-head engine-steady bracket, pillion seat and footrests were removed. Some models also had an oil-pressure button-indicator incorporated in the timing cover.

The WM20 models were fitted with a long field-stand mounted on the rear nearside of the machine to supplement the wheel stands. This was attached to a lug brazed on to the upper nearside rear-frame tube and held in place by a clip. According to the factory ledgers, a few M20 models were originally destined for customers in Sweden, South Africa and India, despite the war having started. Even into the spring of 1940 BSA were still selling their products to overseas Governments and commissions including Holland, Ireland, India and South Africa, as well as in commercial trim to civilian dealers and distributors.

In 1939 a new three-gallon fuel tank was fitted, and a new design of girder-forks used. The speedometer drive was relocated to the nearside of the front wheel rather than the rear wheel and the valanced rear mudguard was replaced by a slimmer number to prevent the wheel being clogged with mud. During late 1940, some leftover civilian specification M20 models were purchased by the War Office direct from the BSA factory, mainly the civilian de-luxe, and militarised by painting them khaki or dark brown. The 1941 model differed only slightly from the 1940 model, both front and rear numberplates being removed and the alloy tappet cover replaced by a plain steel version.

Service experience of the model, particularly in North Africa where proper roads were scarce, had shown the need for readily-adjustable fork damping to offset wear and possible failure of the fork. The first damper-knobs were made of Bakelite, and later of pressed steel. The headlight was changed to a six-inch item with a hooded, slotted black-out shield, and a War Department pattern tail-light was fitted.

By early 1942, a new full-size rear carrier had been fitted to accommodate War Department pattern steel pannier-frames and bags. Pillion equipment was also now standardised and a pillion seat and footrests were fitted to all production machines. The pillion arrangement was fitted so that lower ranking officers could be transported rather than using staff cars, which were thin on the ground.

Dispatch riders liked to look after their own machines and would, when things broke, swap parts with other machines until these collections of worn out parts became unrideable and would be sent to workshops for repair. Military mechanics were, obviously, no respecters of fine details like engine numbers and would put together machines from whatever they had lying about. New engines would be supplied by BSA without numbers, which can make it hard to date a machine today. Shortages meant that in late 1942 rubber fittings were removed on all new machines with the handlebar grips becoming canvas items. A new pressed steel sump guard was fitted to protect the engine and frame.