Imagine being the development manager at a maker of mobile phones in 2007. There you are, happily turning out straightforward push button phones by the shipload. Your customers can’t get enough of your designs – and then Apple introduce the iPhone and you suddenly discover your entire range is out of date. 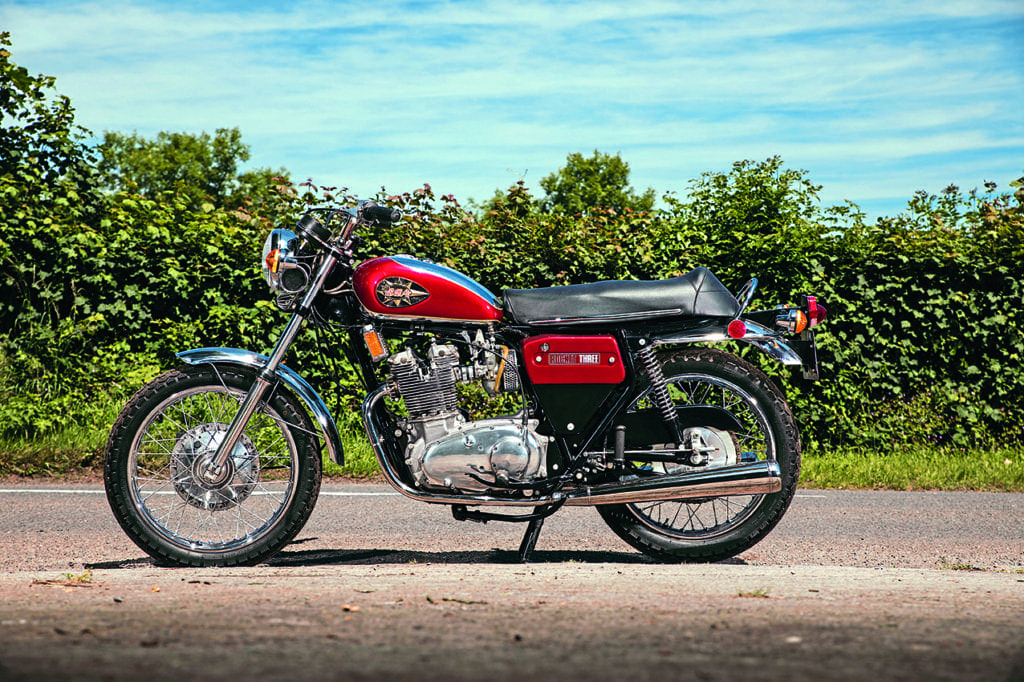 That’s almost what the bosses at BSA-Triumph found themselves dealing with in the mid-1960s. After decades of turning out solid and sporty, if occasionally unreliable, machines, their market was booming. And then the long derided and scorned Japanese started to come up with bigger and better motorcycles of increasing sophistication, while the Italians wiped out what was left of the lightweight market with nice clean scooters.

As managers ran around like headless chickens or buried their heads ostrich-like, the designers remained at their posts. In 1963 Doug Hele, who had been poached from Norton by Bert Hopwood, had taken Triumph’s 500 twin engine, added a third cylinder and created, on paper, the P1 – a 750cc triple. The design was rejected by Triumph’s boss Edward Turner who had his own ideas for a multi-cylinder big bike and Hele, along with Bert Hopwood and Jack Wicks put the P1 on the back burner. It was only when Turner retired and BSA Group went into a panic about the state of their business that the triple resurfaced.

In 1965, with rumours of four-cylinder machines to come from Honda and Kawasaki beginning to escape Japan, Doug Hele was able to placate the bosses with his design for a triple. Three complete sets of engine casings were produced and it was road tested in 1965 using a 1965 T120 Bonneville rolling chassis. The new management saw the triple as a winner and development went ahead. Who knows what might have happened if Hele had been given the go-ahead in 1963? 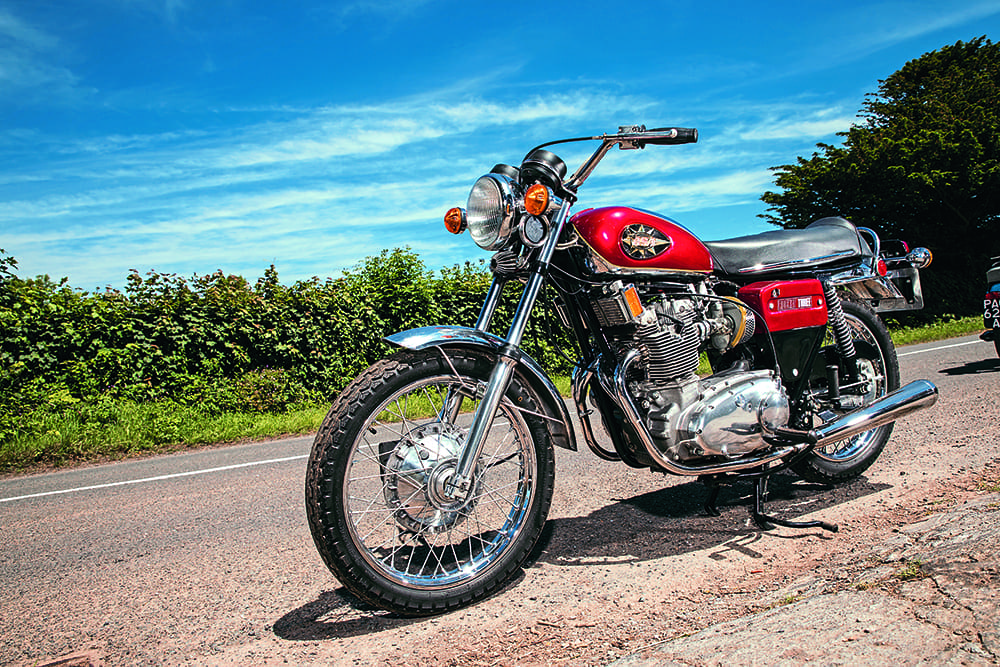 Although the original style for the triple had been based on the Triumph twin, the job of styling the triple was done by Ogle Design, the initial designs being penned by Jim English – uncle of classic racer and Manx Grand Prix winner Glen English. Ogle Design had also been responsible for the Bond Bug and the Raleigh Chopper and were later the designers of Luke Skywalker’s land speeder in Star Wars. The 18-month delay caused by Ogle’s work meant the bikes, which should have taken the world by storm in 1965, were fatally late to the market.

The Rocket 3 is markedly different to look at from its sisters in the BSA catalogue. The machines lost their brand’s distinctive chrome and curves look in favour of something much more angular, topped by a boxy tank dubbed the ‘bread bin’, though not to be confused with the ‘bread bin’ tank used on the later UK T140.

In 1968 the Rocket 3 and Triumph Trident were launched in the US, beating the Japanese to the multi-cylinder market by just a few months, instead of the three years it could have been. BSA hadn’t initially intended to market the triple with their name on the tank as it was Triumph that was the big player in the all-important US market, but BSA dealers across the Atlantic wanted a new big bike and one that was demonstrably different to those offered by Triumph.

The two machines might have been fitted with similar OHV in-line three-cylinder engines, but this was no badge-engineering exercise. The Rocket 3 and Trident had different frames and differently styled engines, the Rocket 3 tilting forwards in an all-welded double cradle design that owed a little to the existing A65 twin frame, while Triumph had a single downtube arrangement with a bolt-on rear subframe, which was similar to the frame fitted to the T120 Bonneville. 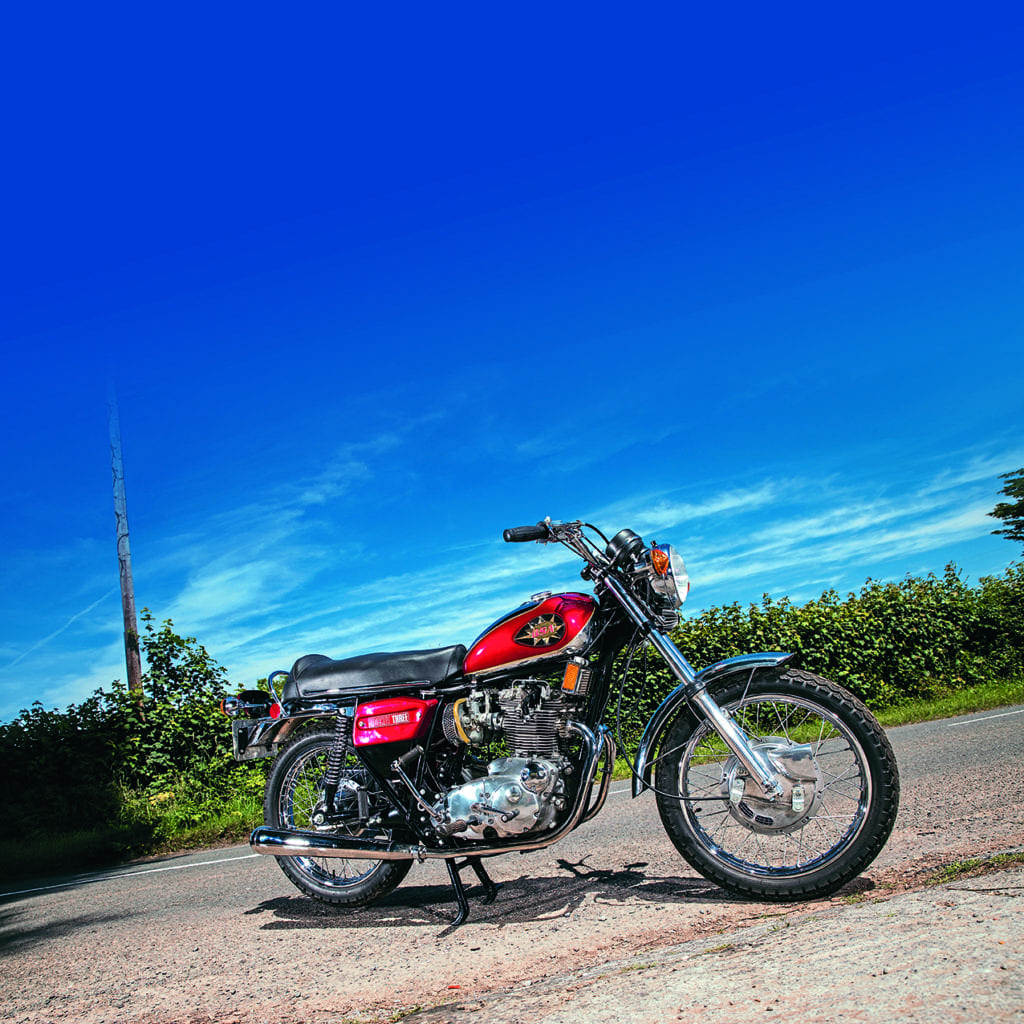 The engines follow the Triumph twin pattern with two camshafts fore and aft of the cylinders operating pushrods in vertical tubes, with a forged 120 degree crankshaft with balance by integral webs and no flywheel, cast and machined at the BSA factory. Big end bearings were plain, and the crankshaft was carried in a three-piece aluminium crankcase. The timing side engine case on the BSA mirrored the ‘power-egg’ look of the existing A series twins, while the Trident followed the separate timing cover and gearbox approach of Triumph’s twins.

However, both models used the same primary drive and clutch cases. Finally, on the BSA there was an oil cooler below the front of the tank encased in a ribbed aluminium trim. Unlike most motorcycles of the day the triples had a Borg and Beck clutch, dispensing with the usual multi spring, multiplate arrangement in favour of a single plate and diaphragm spring operated by a pull, rather than a push rod arrangement. There were four gears and a kick-start, and this was dated in a world where five gears were becoming the norm, as were electric starters.

Production of the Trident started at Meriden with the Rocket 3 at BSA’s factory in Armoury Road, Small Heath with both the Triumph and BSA engines being built at Small Heath where the BSA workers were also making Triumph badged TR25 singles with BSA Starfire engines. This was, according to Triumph’s Hughie Hancox: “To give BSA workers something to do”.

Ogle’s radically different boxy, alloy trim strewn look of the Rocket 3 was not a hit with the buyers who were used to something curvier from BSA. The first Rocket 3 models used many components from the existing BSA-Triumph range including brakes and front forks, resulting in a look that was a curious mix of old and new. A large pair of oval silencers with triple small ‘ray gun’ pipes were fitted that were heavy enough to need extra supports. The exhaust manifold split the three exhaust outlets into two downpipes at the front of the engine, in a three into two arrangement, which may or may not have been to make the bikes look like twins in order not to scare off more conservative buyers.

The later 1975 T160 Trident models had a more complicated three into four into two pipes via an underslung manifold that was possibly intended to make it look like a four. Instruments on the Rocket 3 were in a binnacle arrangement.

Most testers loved it, with Bruce Main Smith declaring the Rocket 3 to be BSA’s: “Biggest and most beautiful hunk of reciprocating machinery.” However, production figures tell their own story and after initial excitement, in the first quarter of 1972 BSA managed to sell just 202 Rocket 3s. In total, 5,897 Rocket 3s were made between 1968-72.

In 1971, the model got a revamp and was launched as a slimmed down Mk2 version, losing the old-style forks and mudguards in favour of the Ceriani-type forks fitted to the rest of the BSA-Triumph range and those models’ conical hub brakes, too. There was an option to have a five-speed gearbox. The forks were an improvement, the brakes less so, losing their feel once they had been used for a while. The shocks lost their chromed covers and upper sleeves. Silencers were now round megaphones as fitted to the A65 and T120 Bonneville and lost the extra strutting.

The side panels were tidied up with the bike rechristened the Rocket Three, rather than Rocket 3. The instruments were as fitted to the A65 and T120 OIF bikes, mounted in brackets attached to the top of the forks. The 1971 model also got indicators, clunky Lucas switchgear, wire headlamp brackets and slender chromed mudguards as used on the rest of the BSA range. The rear frame loop was trimmed to allow the use of the shorter seat pan used on the A65 and T120 Bonneville, though some early versions, like the Mk2 Export seen here, had the sporty seat hump of the last pre-OiF bikes. The Mk2 modifications cleaned the lines of the bike up considerably. Tyres were a pair of 4.10×19 Dunlop TT100s. These were designed for the Rocket 3 and Trident and replaced the thinner 3.25×19 front tyre of the Mk1. It’s easy to forget that in its day the TT100 was state-of-the-art and one thing the Japanese simply couldn’t match.

The British owners of Honda and Kawasaki fours had to factor into their purchase price the cost of a pair of TT100s to replace the Japanese tyres that were unsympathetic on wet British roads. Handling, particularly on the Rocket 3, marked the triples apart from their rivals. Vibration, which had for a long time been the bugbear of British motorcycle ownership, was almost eliminated. There was also the machine’s performance in competition, where the antiquated technology of the triple saw off Japanese challengers for years – indeed the Slippery Sam Trident was so successful that the Japanese lobbied successfully in the late 1970s to have machines over five years old banned as they couldn’t beat the triples on the track. 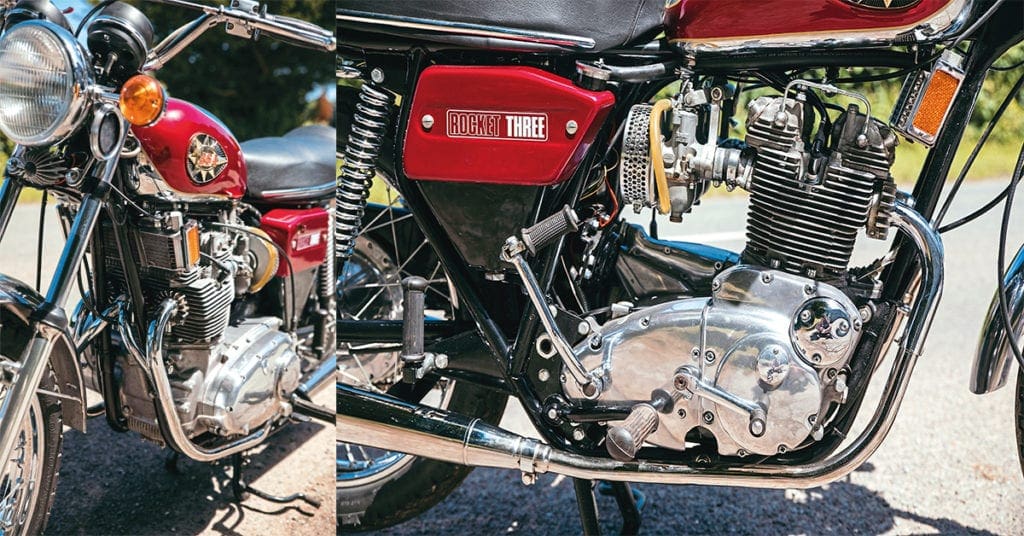 For the US market, BSA bowed to the inevitable and reverted to the 1960s BSA A65 style of petrol tank, which improved the looks. Yet they couldn’t stop fiddling, and painted the frame dove-grey, a look hated by the US dealerships. In 1972, when the last of nearly 6,000 Rocket 3 machines had left the Small Heath factory, they had been given a more conventional black frame and a few had acquired five-speed gearboxes as standard.

Fuel consumption was around 55mpg through the linked Amal Mk1 carbs. A home mechanic could check and adjust the valve clearances without taking the tank off. Clutch inspection was simple through an inspection plate but getting that plate off also required the removal of the footrest and the rear engine plate, which could be fiddly in the extreme. The gearbox was a revelation, especially to those Triumph owners used to a solid clonk on engaging first gear.

Although the BSA-Triumph three-cylinder engines were designed and developed by Triumph staff at Meriden, the production of engines for the Rocket 3 and Trident was carried out at Small Heath with the crankshafts for the Rocket 3 and the Trident being made by the BSA forge. Both engines were then built on the same line with final assembly of the Rocket 3 bikes taking place at Small Heath and Trident at Meriden once the engines had been shipped there. Sadly, Rocket 3 production ended in 1972 when the decision was made to cease using the BSA name and concentrate on Triumph production.