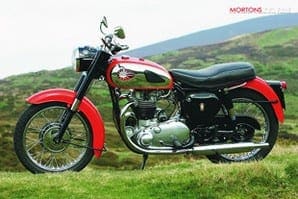 Bob Hall’s Super Rocket came from an impeccable source – a CBG Small Ad. “I saw the ad, called the chap and he said it was a really good one,” he remembers. “It was expensive though, but I went down to see it and took cash – got it for £500 less than he was asking.” Canny man, this Bob.

Nine years later the bike is as he wants it, and he’s out on the roads using it and getting some return on his investment, in the form of enjoyment. It wears Dunlop TT100 tyres and Bob reckons to get through two rear boots in a normal year, which does suggest an active life. I recently looked at a well known tyre website, and we’re talking £155 plus for a pair of sports-bike boots; that’s a price most classic riders can’t afford. 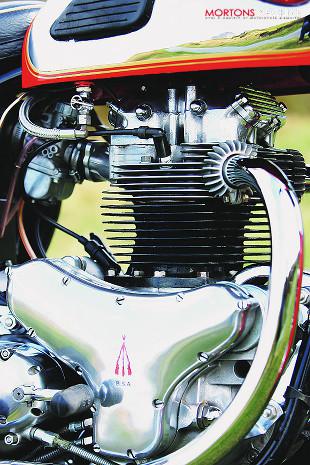 Bob’s bikes started with a 50cc NSU `Quickly’ that was all his dad would let him have at 16. He took his test on it in his native Crosby, and was told to follow a figure-of-eight through the local streets until the examiner stepped out to simulate an emergency stop. He passed that bit, and the Highway Code questions, but failed on his riding. He was told: “Just because I can’t see you when you’re riding away from me, I can still hear you, and I didn’t hear the exhaust note change, which meant you weren’t slowing down and showing proper caution. I suggest you apply again and remember what I’ve said.” He did re-apply, remembered and did pass.

One day the ‘Man from the Pru’ (Prudential Insurance Co monthly premium collectors) mentioned a widow who wanted rid of her late husband’s old bike. Bob and his dad called round, to find a 1947 350cc Matchless G3L in original but shabby condition – a deal was done. The two of them brought it back to decent health and young Bob found himself the owner of his first serious motorcycle.

Bob then moved on to a 500cc G9, which he fitted with a Steib sidecar as an aid to staying upright on the Merseyside winter cobbles and tram lines. Later he changed allegiance to BSA’s Super Rocket, with a sidecar. The traditional move to cars followed and motorcycles faded from his life; gone but not forgotten.

Working life started in the police, but the need for more cash moved him to the building industry and then to the Post Office telephone service that morphed into British Telecom. He’s a long time Red Cross volunteer, driving the welfare ambulance for handicapped kids in his area; there’s no money in it, but the human reward is good. In an increasingly cynical world, it’s good to know that there are still people who simply wish to help others. 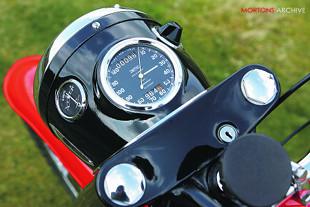 Maybe it was the millennium that stirred his memories into a serious yearning, but nine years ago Bob was browsing through Classic Bike Guide and spotted the 1961 Super Rocket. There was work done, like a later twin leading shoe front brake fitted and a Mikuni carburettor – the owner had commissioned the work to be done by a local engineer, as and when he could afford it and never bothered with bills. Bad move if you’re trying to sell a nice bike for top dollar. Bills to prove what you’ve had done and how much it all cost adds to the attraction of any bike. The result of no detailed work record did help to negotiate the lower price.

Back home, Bob decided to have everything checked out, for his own peace of mind. Having moved from Crosby to Wales, it made sense to visit BSA specialists SRM, at Abersystwyth. They undertook a thorough inspection and a careful rebuild, fitting Thunder Engineering conrods, insisted upon by Bob. “They’re beautifully made. SRM reckon they’re the Rolls-Royce of rods,” he explains. Produced to order by Steve Campbell, using 7075T6 spec aircraft alloy, they easily exceed the requirements of any road riding use. SRM then overhauled the magneto, adding an automatic advance/retard in place of the original manual control and setting the timing with 5⁄16in full advance rather than the standard 3⁄8in. They also sorted out a jet kit for the Mikuni and got that running sweetly, while an SRM touch is the conversion of the dynamo drive from chain to toothed belt, though Mr Lucas’s magneto still relies upon a chain to spin it round. 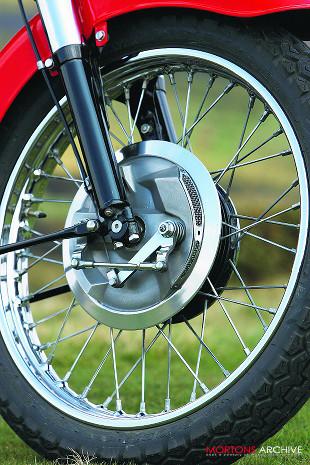 Out on the road, Bob found the gearbox slightly rough, so he and a mate stripped and rebuilt it, with new shafts and seals. Primary drive remains the standard simplex chain and the clutch is similarly as BSA built it; they also fitted taper roller bearings to the headstock. The twin leading shoe front brake drum was skimmed and the shoes fitted with green racing linings.

Paintwork was entrusted to Geoff Allison, over in Wisbech, a refugee from Manchester who used to trade as Miracle Finishers: “Some of the lads still call me Miracle Geoff,” he told us. “I remember doing that bike for a chap in Wales. It must be five years ago that I did it.” Well, five years on it’s a tribute to the man’s standards. “I don’t want to blow me trumpet, but I’ve been in the business 44 years, started with me dad when I was just 16,” Geoff explained.

It’s a handsome motorcycle with black cycle parts and red pressed steel components and I was glad to notice the Stadium rear view mirrors. “I didn’t have them at first, but one day a modern bike came past with a few inches gap and doing 30mph or more than me,” explained Bob. “I needed to see what was behind me.” That’s a logic against which it’s hard to argue.

Fired up at first kick, this is not a soft spoken motorcycle, thanks to pattern silencers that look the part but seem to lack a baffle or two; good audible warning of approach, I reckon. The brake and clutch levers are set up to suit Bob, but were too downward pointed for me, with no natural stretch of the fingers from grip to grasp. Also, moving the bike about before we headed out into the country, the front brake felt very grabby – mental note made to take care. 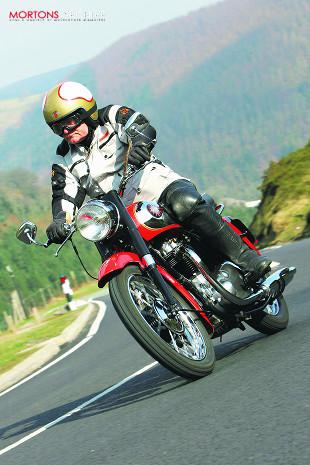 Once on the road the bike’s rideability shone through, that Mikuni helping low speed pull; the engine felt really smooth and responsive with the promise of a good spread of power. There’s nothing to add to the solid, predictable BSA chassis. The gearbox was as sweet as a nut, light in operation, with never a hint of a gear missed; excellent. The forks however were seriously under-damped, which combined with a snatching front brake could have made for a rough ride, but once the brake had warmed up its operation smoothed out and it performed progressively and strongly. The forks definitely didn’t like potholes.

Following snapper Wilkinson, with Bob navigating across rural Wales, I enjoyed a country cruise, our speed limited by the Welsh constabulary’s reputation for pointing cameras at passing bikes. They’ve had one £60 dip into my wallet and I don’t intend to open it to their greedy fingers again.

Bob led us up country to the winding climb of the Horseshoe Pass, where we stopped at the Ponderosa Café, to admire the view. As this is a family magazine, I won’t quote Bob’s words regarding the police habit of hovering in the valley at the bottom of the Horseshoe to film traffic unseen… Far better to tell anyone who’s never been up this stunning climb that a diversion from their journey is well worth the effort to stand on that hilltop and drink in the scenery. I ride a lot in Wales and I’ve never yet run out of new vistas to savour – look at Wilko’s pictures to get a hint of what the place offers. 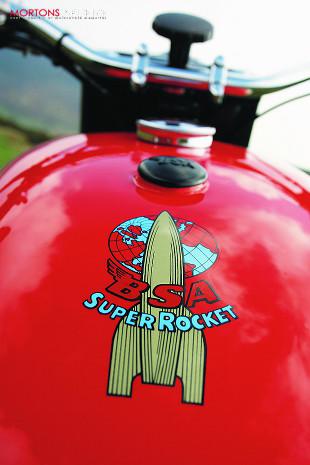 The riding shots involved giving the Super Rocket some stick up and down a stretch of the Horseshoe on a quiet, sunny day. We used a succession of bends of varying tightness, and the flexibility of the Mikuni equipped engine was impressive. On one tight climbing bend I had initially dropped into second, but I realised even in third the bike would comfortably swoop through this right-hander and accelerate strongly up the following climb.

This is the first Mikuni equipped British bike I’ve ridden and I was most impressed. I remember the late Phil Allen explaining how tuneable they were, and here was proof. I can also recall an interview with Barry Johnson, long time Amal sales manager, who said that he would call on big customers like BSA every autumn to discuss the coming model year’s requirements, only to be told that they couldn’t possibly accept a price increase in the current market conditions. Mr Johnson, nobody’s fool, put it: “If you couldn’t put material price increases on the invoice, you took it out of the product.” Mikuni today seem to be in the happy position of selling to the classic bike market on quality and not subject to customers' dictation.

Making progress with minimum waste of time (how the Institute of Advanced Motorists and their bike branch put it) up and down the Horseshoe on a noisy BSA could have been prize bait for officialdom, but in half an hour or so of enjoying myself there was no interruption. When I stopped, Bob thanked me for letting him hear his own bike at work, which made me realise that few of us get to hear the sound our classics emit and could see why mates swap bikes – the listening can be almost as good as the riding. 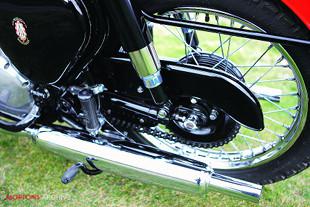 You couldn’t describe the Super Rocket as an overlooked classic, because any member of the BSA A10 family line is going to be a good motorcycle, but with a genuine RGS now fetching five figures and the basic A10 to be found for £3000 for a good 'un, the Rocket should be worth any serious rider’s attention. Its power unit is virtually the same as the RGS, (8:1 cr against the RGS’ 9:1) and a less generous selection of specification alternatives, but it’s damned nearly an RGS engine, housed in a capable rolling chassis with the added benefit of a comfortable riding position. A bike to live with very happily.

Is the A10 BSA's best ever?
The 650cc A10, better known by the more glamorous title Golden Flash, was launched at the 1949 Earls Court Show, the established 500cc A7’s big brother for the 1950 season. Engine dimensions of 70mm bore x 84mm stroke gave a capacity of 646cc and the bike was an instant success, used either to haul a sidecar or cover ground at speed. At 105mph, it was the fastest bike tested by the weekly Motor Cycling that year. In 1953 came the Super Flash, aimed at the American market with its tweaked engine, a power output of 42bhp and a genuine top speed of 110mph. A serious piece of kit in 1953 and very rare today, but all that power in the old plunger sprung frame was pushing the envelope somewhat.

The line’s natural development came in 1954 with the swinging arm frame, and the rather dated Super Flash was joined and then superseded by the Road Rocket, using the new frame. That model in turn became obsolete when the Super Rocket arrived in 1958 and stayed in production until the pre-unit construction line expired in 1963. It has a slight power deficiency when set against the more glamorous Rocket Gold Star, but it’s much cheaper to buy and the chiropractor’s bills will be fewer. As a blend of traditional BSA sensible riding values and enough performance to easily lose your licence today, I would suggest it is the best of the Beesas.