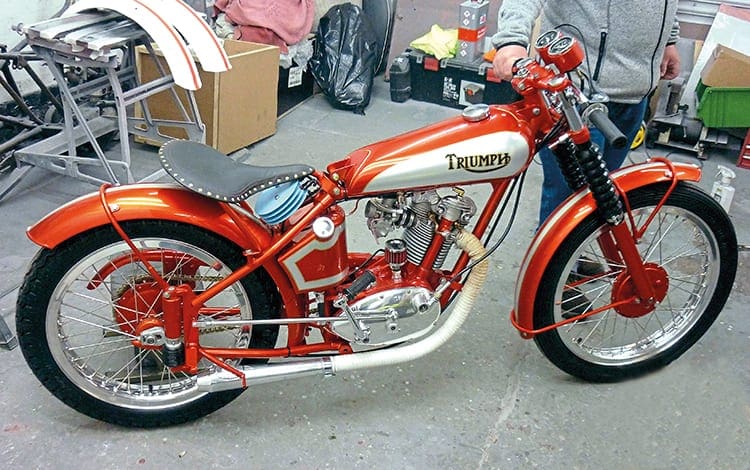 One rather special Triumph Tiger Cub. A conversation between CBG’s Rob Davies and Chris Davies (no relation).

As I stood outside Chris Davies’ garage, I could hear and feel the sound of soft thunder coming from inside; a sound that gently vibrated the side wall. And I knew straight away that the throaty roar came from no ordinary Tiger Cub. As I entered the workshop, Chris and Mark were running the punchy little engine up for the very first time. The confident sound of this not-so-little engine with its shiny reverse cone mega was now deafening, and exhaust fumes slid quietly out through the vent system.

“I’m just warming it up!” shouted Chris above the raucous revving, and I nodded in acknowledgment. So I propped myself up against the wall, admiring the simply beautiful lines and finish on this – what is essentially to be a racing machine. Then when the engine was duly warmed up, Chris cut the engine, smiled a smile of satisfaction, and we retired to the office for a cuppa. Chris Davies has been tinkering with Triumph Tiger Cubs for some years, but over the last five years has turned what was a hobby into a pretty busy full-time job, ably assisted by his wife Mary and assistant Mark. Mark disappears to make the teas.

CBG: I bet you’re pleased with that, aren’t you? It’s the sweetest sounding Cub I’ve ever heard. Powerful too.

CHRIS: I am. I took the bike to the Stafford show, where it got lots of attention, but I never did start it up. But now I know it runs well, and I can now start to steadily run it in ready for the racing next season.

CBG: That’s not a standard Cub engine, is it? Perhaps you can tell us its background?

CHRIS: I wish I knew more about its history really, but there is possibly a factory connection because, as you can see, there isn’t much standard about that engine to start with – even before I got to work on it. I had it from a friend who’d had it for some time and not done anything positive with it. He gathered that it had been used for some kind of competing, and the story was that it had done 112mph, but that’s about all he knew. Later he let me have the plunger frame from the Cub’s predecessor, the Triumph Terrier. They had never been together in the past, but were now about to be permanently joined.

CBG: So how come you decided to turn this Cub/Terrier into a race machine?

CHRIS: At first I just used the engine as a talking point, but later I met some people in The Straight Line Club who do top speed racing for various classes down at Pendine Sands in Wales, and I don’t know where these crazy ideas come from, but I suddenly decided that this was exactly the bike to take there.