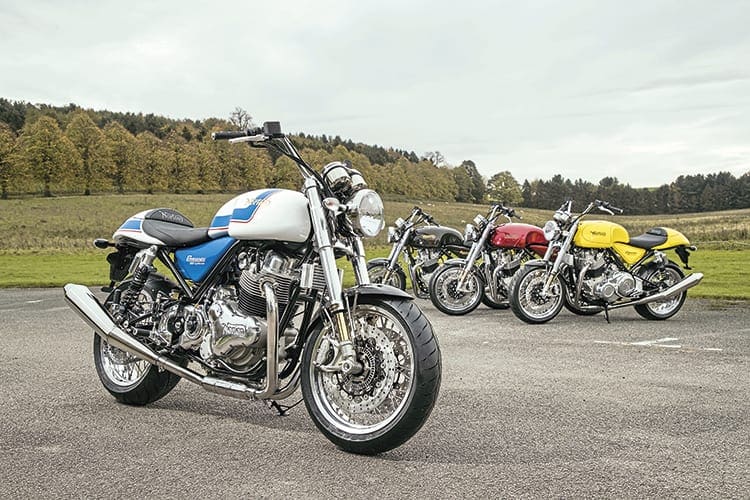 NORTON HAS LAUNCHED a limited edition of its 961 parallel twin to mark the 50th anniversary of the arrival of the original Norton Commando.

The new Norton Commando 961 California has been built with high bars and a selection of paint jobs, including one with blue and white paint that apes the look of the classic 1975 Commando Roadster. Described as “the easy riding roadster” by Norton, the 961 California will be produced as a batch of 50 as will anniversary editions of the rest of the Commando range.

Each anniversary bike will have its production number marked on the instrument binnacle. The high barred version is designed to attract foreign sales as 80% of Norton’s sales – currently nudging 1000 bikes a year – go abroad. The California has ABS Brembo brakes, Ohlins suspension a carbon fibre front mudguard and a hand-made Norton chassis.

Harking back to the original Commando, the California has a chromed headlight and chain guard, pea-shooter style exhausts, polished alloy and black painted barrels and will come in four colours. The California will stay in the range once the first 50 have been sold but will lose the extra upgrades. There will also be anniversary editions of the Café Racer and Sport Nortons. Norton has also unveiled plans for a new 650cc Scrambler. Although details of the machine have only been released as a series of design drawings, development is believed to be well advanced.