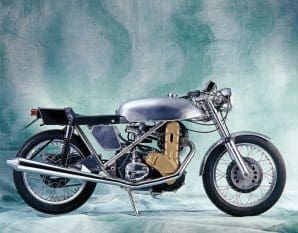 The Seeley Condor has acquired an almost mystical reputation among classic bike enthusiasts – partly because of the exotic race heritage, but mostly because it is such a rare beast.

So you can imagine his surprise when Colin Seeley saw this Condor at a French circuit.

The owner didn’t know who I was,” explains Colin, “but when he realised that I was the man who designed his bike he got very excited and started slapping me on the back!”

The Condor was not the first road bike to use the single overhead camshaft Matchless G50 engine.

You could tell that he had the Harley boys worried when the AMA banned the hybrid because it wasn’t based on a road bike.