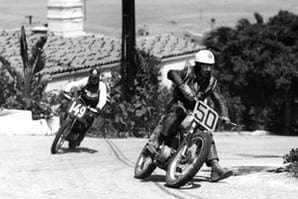 But, because the event didn’t run to strict American Motorcyclist Association technical regulations, the governing body refused to sanction the ‘Grand National’ permit so the 1954 event was run independently, with any make or model motorcycle allowed to compete.

The meeting took place over two days, with the lightweight classes on Saturday racing over six laps of the 10 mile course – four miles of paved surface, two miles of rough loose dirt and another four miles of an oiled dirt surface to give the competitors a taste of road racing, hill climbing and motocross each lap.

First home on Saturday was C Cripps (C11 BSA), winning the up to 369cc side valves and 255cc overhead valves engines class. Second was the prewar Triumph single of G Alguire while Dave Ekins, brother of the very famous Bud, was third on an NSU. Bud Ekins finished second in the 150cc ohv/200cc two-stroke class riding a Francis-Barnett.

The heavyweight bikes, with an entry of 207, raced the following day over 10 laps of the same course and J Johnson, riding a 499 Velocette, set a new race record to snatch victory from 1200cc Harley-mounted R Tanner who The Motor Cycle reckoned, “is probably the only man in the United States who can ride a big twin over such terrain; indeed he has enjoyed very little success with any other type of machine.”

Manufacturers attached a surprising amount of importance to the Catalina GP. In 1954, NSU sent a factory technician to help fettle the bikes and was rewarded with a win by N Illsley in Saturday’s 100cc ohv/125 two-stroke class. And again on Sunday when Dave Ekins annexed the 21cu in class on a 247cc NSU.

After Chuck ‘Feets’ Minert won the 1956 GP (when the event attracted over 1000 competitors) riding a BSA Gold Star DBD34, the BSA factory named its 1959 Goldie for the US market, the Catalina Scrambler.

• Images like this can be purchased fromt the Mortons Archive.