CCM has introduced its latest incarnation of its 600cc roadster, the RAF100 Spitfire! 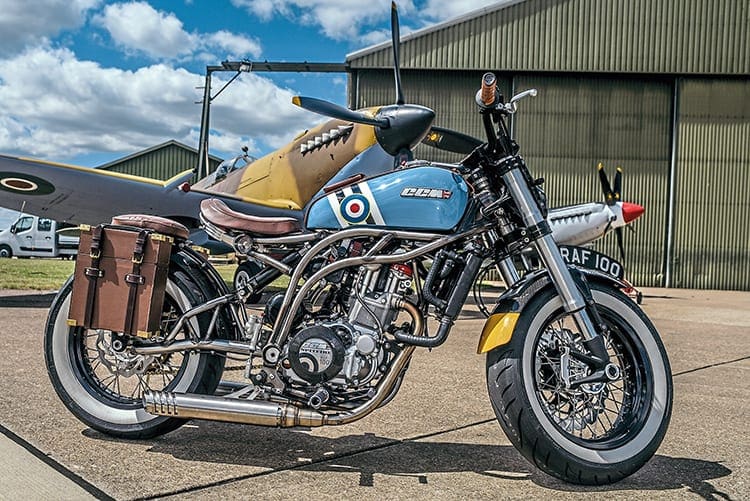 The Bolton company says the machine was inspired by a special era of British motorcycles and the Brough Superior ridden by RAF Aircraftsman T E Lawrence, Lawrence of Arabia. The machine features handmade luggage panniers and a vintage ‘cheesecutter’ front registration plate. Other notable styling themes are taken from different Spitfire aircraft from the Second World War.

The blue tank was inspired by the equally stunning prototype Supermarine Spitfire K5054 built in 1936. Invasion stripes as used in D-Day landings wrap around the tank, and the carbon fibre mudguard tips are modelled around the yellow tips of the Spitfire propeller. The power comes from the 600cc thumping single used across all Spitfire variants, and the bike has the same artisan hand-welded trellis frame as its sisters.

Each machine is inscribed with a facsimile of the signature of Sydney Hennan, the father of one of CCM’s founders, who lost his life serving in the RAF. The RAF100 Spitfire will be sold as part of an extremely limited run of only 100 motorcycles and each motorcycle sold will include a £1000 charitable donation that will be given to RAF charities, raising £100,000 for this very worthy cause.