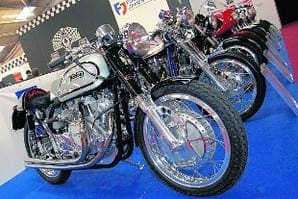 At best it will push up prices of chrome plating dramatically but the worst case is that your local chrome craftsmen will be put out of business. Now, apart from the fact that they can’t even get their own acronym right (surely it should be REARCH?), this is a very worrying proposal.

Classic Bike Guide contributor Steve Cooper is a qualified chemist and professional chrome plater. He told us: “As is often the case, the sentiment behind it – to protect workers from exposure to harmful chemicals – is absolutely right. But because the proposals have been drafted by bureaucrats, with little grasp of the reality of the industry, there are huge problems in the offing.

“There are two chroming processes, hexavalent and trivalent. The first is easier to apply and used on things like fork legs, the second is slightly trickier and used on handlebars, mudguards etc. The hexavalent process is supposedly carcinogenic, but this has been known for years and chrome platers have to run their businesses in an efficient and safety conscious manner. There was one case about 20 years ago where workers in a plating company became ill because the correct safety procedures were not followed.

“REACH wants to ban the sale of chromic acid to anyone who hasn’t joined the Chrome Consortium (joining will cost businesses around £10,000) or make it so you can only buy from approved suppliers. The regulations are all about the handling of chrome and discharge of effluents into the environment.

“The pending legislation is going to be so hard, so punitive and so costly that many platers will simply go out of business. Those that remain will struggle to compete against companies in the Far East not bound by this legislation.

“And let’s not forget that we aren’t just talking hobbyists and restorers here. Many of the firms chrome plating classic motorcycle mudguards earn their bread and butter doing heavyweight engineering contracts for British and European industry. Much of that work will also now go outside the EU.

“And there isn’t really an alternative. Nickel plate doesn’t have the same depth as chrome and doesn’t age as well either. Plus, as a result of this nickel prices will also go through the roof and it won’t be too long before the spotlight turns onto other metals.”

CBG is worried. As ever some people will see this as an opportunity – expect to see Chinese made Bonneville mudguards any day now. But anyone restoring a less mainstream machine will struggle to get their brightwork restored. Watch this space, we’ll keep you posted.

How chrome plating works
Watch the chrome flaking off a rusting mudguard and you’ll believe this is a thick coat of shiny stuff, but the reality is different. Most of the shine comes from proper polishing of the steel underneath. Once the steel is polished a thin layer of copper is added over it. This is followed by a thin layer of nickel, which is what gives most of the shine.