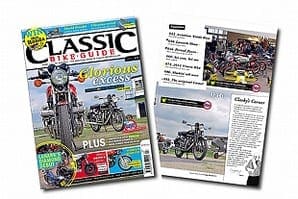 REGULARS
• Products
What’s new for you
• The Big Question
What’s this big squeeze?
• Retrospective
Sidecar stars quit. Georg Auerbacher and Helmet Fath, two of the worlds greatest sidecar exponents saw their careers end in Finland, during August 1969
• The Good Guys
SRM Engineering. Looking for a genuine one stop shop with top service? Then you could do a lot worse than head to the valleys of deepest South Wales…
• Tech Triumphs
Weird science from Japan
• Subscriptions
Save yourself some cash
• Louise Limb
Celebrating the jubilee

FEATURES
• Aviation Wolds Run
Despite a chilly wind and some fairly hefty showers, more than 500 riders, on machines old and new, turned out at East Kirkby Aviation Heritage Centre, to help raise over £4500 for the Lincs-Notts Air Ambulance. The resident Lancaster – Just Jane – did her traditional brace of taxi runs and the co-resident DC3 Dakota did some superb low flypasts across the gathered bikes
• Lanark Show
Scotland’s successful debut 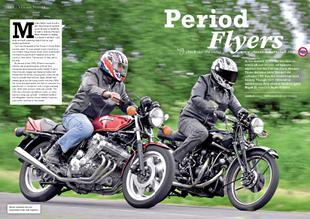 • Period flyers
In the austere 1950s, the machine to which all motorcycle enthusiasts aspired was the Vincent Black Shadow. Three decades later, Honda’s six cylinder CBX was the world’s top road burner. Though very different in appearance, they share a kindred spirit. Nigel C. enjoys a flight of fancy…
• Sei you, Sei me
The story so far. With plans drawn up, Alan Arnold gets down and dirty with a little help from his friends and the Benelli makeover starts to take shape
• 2011 V-twin BSA
Small Heath’s latest from down under
• Shakin’ all over
Vibration causes and problems 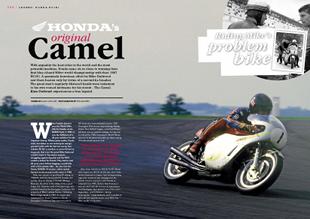 • The original Camel
With arguably the best rider in the world and the most powerful machine, Honda came oh so close to winning their first blue riband 500cc world championship with their 1967 RC181. A genuinely herculean effort by Mike Hailwood saw them beaten only by virtue of a second tie breaker. The great man’s regularly blistered hands were testament to his own coined nickname for his mount – The Camel

Plus all the usual regulars. On sale now!