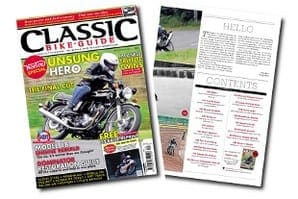 On the Road
Aberdare, Chesterfield, Barton, Skipton and chopper speedway

Mould Breaker: Yamaha AS1
The Japanese manufacturers (and Yamaha in particular) have a long history of building fast and sporty learner-legal motorcycles. Yamaha’s AS1 was the first. Bye bye Bantam? You betcha.

Letters
You write, we listen 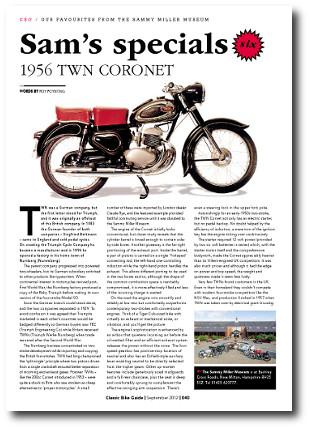 Sam’s Special
TWN was a German company, but the first letter stood for Triumph, and it was originally an offshoot of the British company. In 1883 the German founder of both companies – Siegfried Bettmann – came to England and sold pedal cycles.

Honda Six debuts: Monza 1964
It’s the weekend of September 12-13,1964. The 250cc racer that Honda have just uncrated for Jim Redman at the Italian GP at Monza has four exhausts and is entered as a 3RC164, suggesting it is the third incarnation of their four-cylinder machine. By first practice Jim Redman’s mechanics have fitted the additional lower two pipes and the paddock is awash with rumours. When the bike fires up, everyone knows there is no going back. Not only in racing, but the rest of motorcycling too. This is the moment the Japanese become dominant. 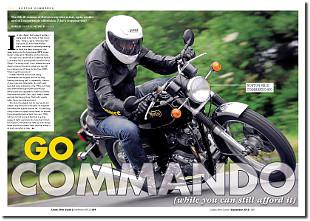 Japanese big twins
We scoffed at the time – are they any better now?

Triton tales
It all started with an email from a reader, with an interesting story attached about how James Deighton invented the Triton. Now, I have to admit here that I’d never heard of James Deighton. I asked the experts what they thought and it turned out that no one else had heard the story either. Fascinating. Have we uncovered something – who did really invent the Triton?

Buyer’s Guide
Suzuki’s GT550 is one of the overlooked 1970s strokers. Eclipsed by the GT750, thrashed by the Kawasaki H1 and undercut on price by the company’s own T500, the biggest of Suzuki’s air- cooled triples still plays bridesmaid today. But Britain loves an underdog and finally the GT550 has come of age. 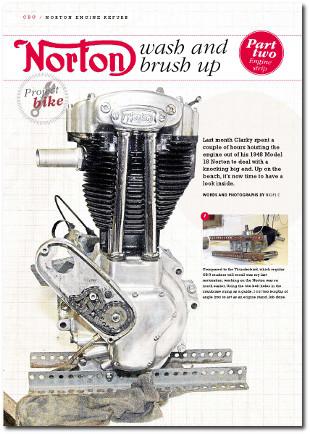 Norton engine rebuild
Last month Clarky spent a couple of hours hoisting the engine out of his 1948 Model 18 Norton to deal with a knocking big end. Up on the bench, it’s now time to have a look inside.

Buyer’s Guide: Matchless G3
The Matchless G3 proved itself gutsy and reliable in wartime and afterwards too. The result is a real usable classic for today.