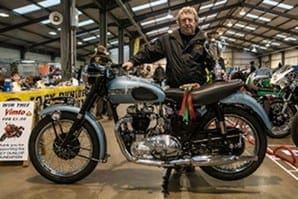 Thousands of enthusiasts sheltered from the cold in the packed halls at Newark Showground on January 4-5, where they surveyed the rows of stunning classics and the array of trade and autojumble stands.

But it was 1980s race ace Roger Marshall who stole the show, as crowds gathered to listen to his entertaining and revealing on stage interviews with former TT winner Steve Plater.

“There were plenty of people who gathered around the main stage to hear Roger’s Q&A and they certainly weren’t disappointed,” said exhibition manager Nick Mowbray.

“He shared memories and moments, both high and low, from a successful and storied career, as well as recounting meetings and battles with iconic names such as Joey Dunlop and Wayne Gardner.” 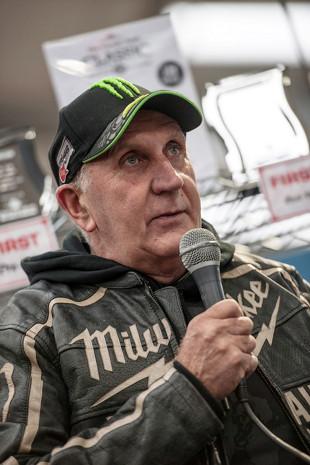 Malcolm Wheeler, current editor of Classic Racer magazine and a fellow 1980s competitor, also took part in some of the on stage activities: “Roger was on top form up there and shared some highly entertaining episodes from a clearly eventful life and career,” said Malcolm.

“It was also great to talk to him about the rich history and promising future of racing in the East Midlands – fuelled by Cadwell Park – and his current involvement as a judicial steward in BSB.”

The former factory Honda and Suzuki rider was also on hand to give out the show’s awards – presented to the best in restorations, displays and club stands.

Along with the classic motorcycle sections of the show, the Scooter World Hall was back by popular demand – a dedicated area that showcased the best in UK scooter clubs and private entries.

Scooter sport celebrities John and Norman Ronald were there for a Q&A session with Classic Scooterist editor, Mau Spencer.

The Lincolnshire and Nottinghamshire Air Ambulance even dropped in on proceedings to collect funds raised by organising team Classic Bike Shows at a special auction at Newark Showground in June.

With 2014 marking the event’s third year, the Carole Nash Classic Bike Guide Winter Classic has firmly established itself as the top classic motorcycling event in the region and looks set to carry on a tradition of being the classic calendar curtain raiser for years to come.