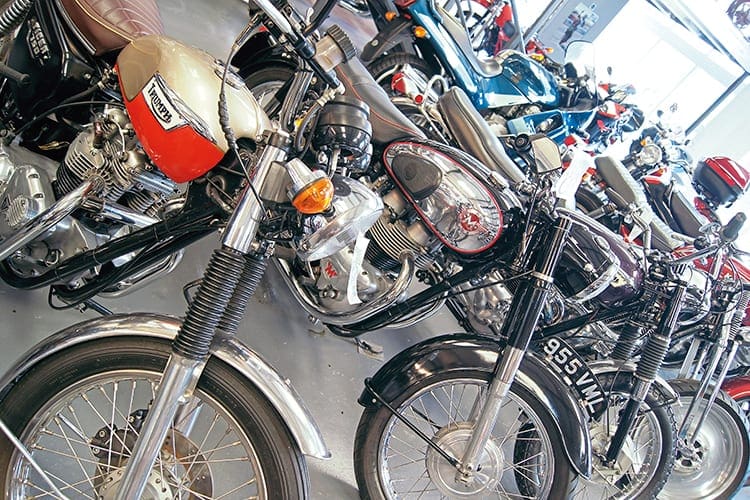 It’s the perfect place to stop by for a brew – especially as the all-new Kick Start café alongside the showroom also serves a brilliant all-day breakfast.

NCM has been trading for the last quarter century, and if you ever visited the old premises then you’ll know that things got somewhat cramped as the business grew in recent years. The new showroom fills four units on the outskirts of Bude, and the bikes on display now have room to be viewed over spacious two floors, alongside clothing and accessories.

Unlike some big bike shops which only accommodate modern motorcycles, NCM encompasses just about everything. You’ll find around 100 classic and second-hand machines in stock, ranging from vintage veterans to standard British classics; plenty of cult Japanese superbikes from the 1970s, trick flat-trackers and carefully crafted café racers as well as current sportbikes and touring motorcycles. The team even builds some specials in their own workshops, where the service department also provides everything from routine maintenance to a complete restoration, carb cleaning, electrical and mechanical overhauls and MoTs on machines of all ages and origins.

NCM is an award-winning Royal Enfield dealer and always has a range of new and used Bullets available. You’ll also find Mash retro machines in stock, including the new Trackstar café racer. Browse around the old Britbikes and you’ll be surprised to find more variety than just the usual Triumph twins. We zeroed in on not one but two beefy Matchless twins, a Sunbeam S8 looking glorious in golden livery, a pre-unit Triton so tidy you could eat that full English breakfast from it, and a really rather trick Triumph 750 bobber which you may be able to see hereabouts. There were even a couple of Kawasaki W650s for those people who want the traditional parallel-twin experience at the press of a button.

During the summer, the showroom and workshops are open seven days a week, although the café is closed on Mondays. Finding NCM can be a bit tricky as it’s no longer on a main road: best to check the map before setting off to Units 1-4, Kings Hill industrial estate, Bude, EX23 8QN.

Visitors are very welcome to just stop by for a coffee and a natter, and now there’s plenty of space to swing a leg over the saddle and try the bikes for size. 01288 355162 / ncmc.co.uk