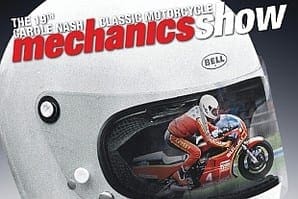 ‘Croz’ raced from 1974 in his native New Zealand superbike class and headed for Europe a couple of years later. He came to prominence in the UK by successfully campaigning the sit up and beg Moriwaki Kawasaki. In 1980 he won the Senior TT and became part of Suzuki’s official GP squad. Among his successes that year he also won the Suzuka Eight Hours race and the TTF1 World Championship. He finished fifth in the 1981 500cc world standings and retained the TTF1 title. He swapped to Agostini Yamaha for 1982 and won the Daytona 200. He finished runner-up in the 500cc world ranking before retiring unscathed.

He’s since run a series of successful motorcycle businesses, seen success in Antipodean touring car championships and has been inducted into the NZ Sports Hall of Fame.

Club stands are being booked up fast too, more than 60 at the last count, so you can see a bevy of beautiful 1960s, 70s and 80s machines looking their very best.

For more information and details of the Classic Bike Shows team's other events, visit www.classicbikeshows.com