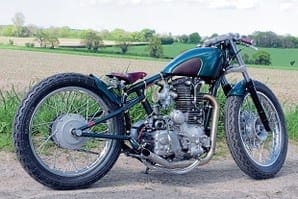 “There are three types of bike we build,” he told Classic Bike Guide. “The first is a one-off. Your ideas, your spec brought to life. A true one-off. The second type is our design, built in limited numbers – somewhere around 10 of each type and the third is a slightly lower cost machine, built around an existing bike.

“Doing it that way allows us to offer different bikes for different budgets. Our first bike, the Pup (named after Sopwith’s First World War fighter plane) uses an Enfield motor, but everything else is a one-off. It took almost 600 hours to build, although, hopefully, the next one will be a little quicker because you can never charge the customer the true cost of a build or the bikes would be out of reach.”

So how come a young, er, pup like yourself is into all this stuff Alec? “I was 16 and saw the film Easy Rider. It changed my life, gave me a focus and I went off to college to learn metalwork, welding and motorcycle maintenance. Then I got a job in a local custom bike shop to learn how to build a bike from scratch. When some premises became available I took the plunge. It took a year to convert them into a viable workshop and in November 2011 I started work on the Pup. Three months later it was finished.

“Starting a custom business is hard work. Building a reputation is even harder. Getting out there and letting people see the bike has been vital, but it’s paying off. I didn’t want to go down the big-V-twin chopper route. Those bikes might appeal to some, but I want my machines to be practical and easy to ride too.

“The Pup will be on the Amal stand at the Stafford show in October. Come and say hello as you pass.”

Old Empire Motorcycles is on 01379 898987 or www.britishcustommotorcycles.co.uk