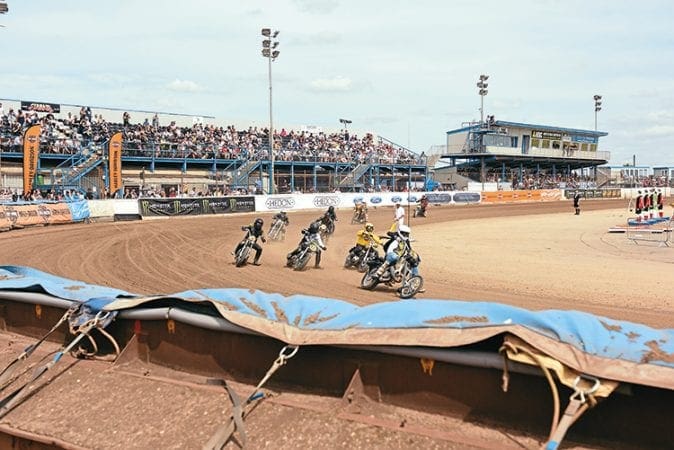 What SORT OF weird world are you in when you see Guy Martin racing a chopper, Carl Fogarty battling a Triumph, Steve Plater wrestling a Harley-Davidson and Neil Hodgson piloting a Royal Enfield? Sounds like the Wacky Races… which is probably the best way to describe Dirtquake, the unique dirt track racing meeting.

Dirt track racing has taken off in the UK in recent years. Raced on speedway tracks, it differs from speedway by using motocross-derived bikes with a rear brake, suspension and different tyres. They also race over more laps and have more bikes per race.

But Dirtquake takes this formula and adds a fun element to the equation. Run at King’s Lynn speedway stadium and now in its sixth year, the less appropriate your bike, the more you’ll fit in. This includes races for choppers, scooters and ladies, with all makes and types of bikes being used to get around the shale oval as fast as possible.

The atmosphere this year was very relaxed, the racing exciting (with many riders in fancy dress) and there were some great bikes to be seen, including several BSA Thunderbolts, old Harleys and Seventies Honda twins mixing it with more modern machines.

Unfortunately, as they say ‘motorsport is dangerous’, and so it was ‘Foggy’ found his competitive nature getting on the throttle a little too early, shooting over the top of his Hinckley Triumph, breaking ribs, a shoulder and puncturing a lung. Until then, the multiple world Superbike champion and TV celebrity had been really competitive. Hopefully he will make a full recovery quickly – get well soon, Carl.

Dirtquake 7 will be here in 2018. For more information, see www.dirtquake.com