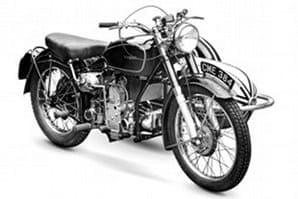 Mills wrote: “In the motor cycle movement this is a sprinkling of enthusaists who derive almost as much pleasure from building machines as they do from riding them… and they are not happy unless able to ride something that is distinctly, ‘one off’.

“The popular name for this happy breed is ‘bitza-builders’ a title that seems a little wide of the mark. The home-built model is usually a beautifully prepared machine and more often than not, expense is a secondary consideration in its construction.”

This sidecar outfit was built by Gordon Rowe from Willesden. In 1950 he found a 1931 596cc overhead valve Rudge which, though not in great trim, still performed well enough to convince him of the machine’s potential.

The engine was removed from the frame and sent to the Technical Rebore Service for a complete overhaul. Rowe meantime worked on the cycle parts and since the original Douglas fork had been wrecked in a crash, he replaced it with an old AMA Telehydraulic front end that fitted the steering head perfectly.

He then fitted an Ariel front wheel and brake and the original front mudguard was panel beaten back into shape and then resprayed.

With the engine back in the frame, Rowe decided to scrap the old Douglas three-speed gearbox and replace it with a 3W Triumph gearbox and clutch which was fixed in the same angle of the frame, below the saddle. The gearchange pedal on the Triumph box was modified and linked by rod to the a second pedal mounted at footrest level.

The linkage though meant relocating the oil tank. Rowe fabricated his own and placed it under the fuel tank, just above the front cylinder.