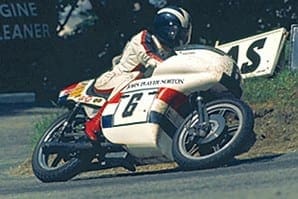 The 1973 TT proved it could continue to flourish without the top Grand Prix stars who had vowed never to return to the Island after the death of Morbidelli 125 rider Gilberto Parlotti during the previous year’s event.

With no exotic GP bikes in the traditional 500cc and 350cc races to carry the event, more emphasis was put on races like Formula 750 where British bikes had reigned in previous years with Tony Jefferies winning the inaugural three-lapper on a Triumph in 1971 and Ray Pickrell in 72.

The BSA/Triumph group was struggling though and in 1972 there was no longer a factory effort, instead bikes had been loaned to riders – while Norton was on the ascendancy and by 1973, with continued John Player backing, had become the team to beat.

Peter Williams, factory rider and designer of the team’s new monocoque-framed machine, had so often been the bridesmaid at the TT – famously finishing second riding an Arter Matchless with the first cast spoke wheels to Agostini’s exotic MV Agusta multi in the 1971 Senior.

But in 1973 he was the favourite to win the F750 race and duly performed as expected in the five-lap race to give Norton its first TT victory in 12 years.

He also set the fastest lap of the race, the second-fastest TT lap in history at 107.27mph, and when Jack Findlay retired with gearbox trouble on the last lap, Williams’ team-mate Mick Grant inherited second place to give the Norton team a resounding one-two ahead of Jefferies’ Trident.

Visit the Mortons Archive for more information and online search options concerning Norton or other classic motorcycle images, or speak to our archivist Jane Skayman on 01507 529423 with your requirements. Email enquiries@mortonsarchive.com