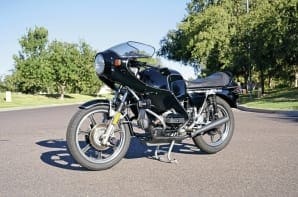 The company had to compete with other European speedsters from Moto Guzzi, Ducati and Laverda, as well as an increasing number of Japanese multis.

Moving motorcycle production from Munich to Spandau in 1969 signalled the end of one era and the introduction of the all-new, modular /5 range.

Known for their rugged designs of understated elegance, BMW shunned four cylinders and opted instead to showcase the marque’s core values in a modern, more svelte package.