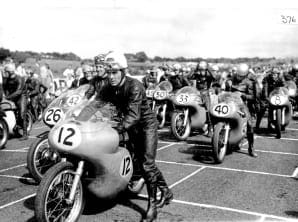 Six-time world champion and six-time TT winner Geoff Duke OBE passed away peacefully on Friday, May 1 at his home in the Isle of Man, at the age of 92.

Duke was the first global superstar of Grand Prix racing. He was the first rider to win three successive world championships – the 1953-55 titles on four-cylinder Gileras – and also the first to win two in the same year, when he won both the 350cc and 500cc world crowns in 1951 on Norton Manx singles.

In the 1950s Geoff Duke became a household name all over Europe and the British Commonwealth thanks to his good looks, stylish riding, polite manner… and especially his underdog success.

He defeated the four-cylinder Italian multis from Gilera and MV Agusta to win the first three of his six world titles aboard the much less powerful but better-handling Norton singles.

Norton’s directors were far from happy that Duke would earn more than they did if they paid him what he was worth, so he transferred to the Gilera team for twice the salary he was earning at Norton.

At Gilera he swiftly transformed their fast but unruly fours into unbeatable machinery which took him to three more 500cc world crowns. It might have been more, but for a combination of injury and the six-month ban imposed on him by the FIM for daring to support the hard-pressed privateers’ strike for more start money at the 1955 Dutch TT at Assen.

Read more in the June edition of CBG