Of course it would be rather pleasant not to have to do this job, but as they say in the army… “if you can’t take a joke you shouldn’t have signed up!” Realistically there is no one size fits all solution, but there are devices out there that can and will make classic ownership just that little less irksome.

Scour the small ads of this or any other magazine dealing with classic vehicles and the chances are you’ll see folk offering all manner of ignition systems for ancient engines.

If you are part of the mainstream crowd you are almost guaranteed of a system for your bike, car or truck. But move outside the more populous models and chances are you’ll only be able to source an electro-mechanical equivalent of snake oil.

Some of the gizmos have their origins back before the Second World War and many of the so-called claims made are hard to quantify or substantiate. It’s not until we find a mainstream supplier of high-end ignition systems offering a universal system that many of us begin to get any level of confidence in such aftermarket fitments. 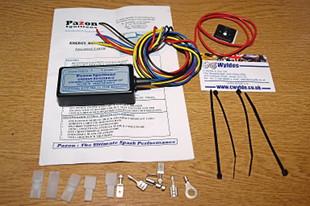 This month we’re looking at a unit from Pazon. The company’s Energy Booster effectively only uses the points as basic low voltage, low current switch. The unit obviates the need for a condenser, delivers a stronger and more consistent spark and thus, in theory at least, should offer better performance and fuel consumption.

With the cost of OEM ignition components spiralling (if you can still get them) and the variable quality of some pattern alternatives, it makes sense to maximise the benefits of what’s already there. So we therefore find ourselves about to fit a Pazon Energy Booster to some period Eastern European Soviet Bloc iron. Oh the variety of machinery that passes through the CBG workshops!

More responsive
Of course the proof of the pudding is in the eating as they say, and with this sorry old MZ the transformation is quite remarkable. Never the best starter, the Pazon unit has transformed it, it fires up easier and takes a lot of huff and puff out of the process.

On the road the bike simply feels more responsive and, dare I say it, lively. All of which just goes to demonstrate how much performance gain there is to be had by optimising your bike’s ignition.

The Japanese grasped this concept quite early on and extracted a lot of power from smaller engines by getting the timing bang on. The use of a Pazon or similar electronic enhancement simply refines this process a little further. 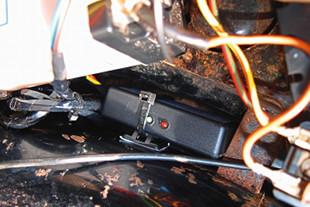 As we went to press we’d heard of similar successes on a range of machinery. A BSA SS90, a Villiers powered AMC stroker twin and a brace of Suzuki 250s have all benefited from allowing a black box and not a spring dependent switch from timing that all important spark. Ultimately any system that retains points will always be, to a degree, compromised. However, if the bike in question isn’t an out-and-out sports machine then you’re hopefully not naively chasing ultimate performance.

To us here at CBG £60 for reliable starting, enhanced usability and, potentially, improved fuel consumption is a no brainer. You can pay more than this for a couple of NOS tank badges that’ll do little more than look pretty.

Enhanced ignition control inevitably brings benefits and the ultimate in such systems has to be a fully programmable system. This and a more modern power generator system should be capable of getting the most out of a classic motorcycle engine. Therefore watch out for a special CBG feature coming up soon on how to ditch points and condensers completely, get a higher output generator and bring your classic into the 21st century.