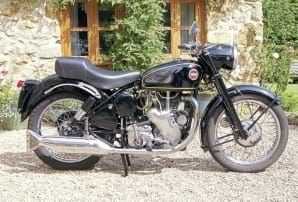 ‘FIRST CLASS PERFORMANCE without fuss’ promised Veloce when it reintroduced its 500 ohv single in 1954.

That’s not too far off the mark today, which is why the MSS is one of those much sought-after traditional British singles that ranks alongside Vincent’s Comet as a distinguished gentleman’s all-rounder.

Velocette’s four-strokes are the archetypal upper-class classics, a cut above the ubiquitous parallel twin and far more refined than the typical grey porridge single cylinder slogger of the 1950s and 60s.