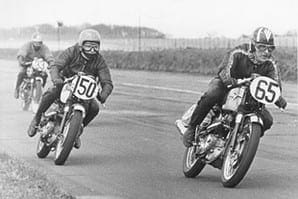 He was 77 and president of the Bewdley MCC, a club he joined in 1962 wherein he added grass tracking to his weekend trials riding. Club chairman Graham Turner was a pal: “We used to follow one another round, so if we had a problem with a bike we could sort it out between us. I remember once Geoff having trouble with his gearbox, when we were waiting to ride this section deep in a narrow valley. We swapped numbers when the observer wasn’t looking and both rode through on the same bike.”

Geoff and Malcom Gee launched the Bewdley Bonanza grass track in 1975, in a natural bowl, near Abberley, Worcestershire. Typical Geoff, because the club had no money then, he and Malcolm put up the prize money. He later persuaded riders such as Ivan Mauger, Peter Collins and Don Godden to ride there and it was one of the biggest meetings in the calendar – which improved club finances greatly.

He was the MCN grass track columnist for many years and when he was replaced by John Simcock, he wrote a warm welcome to the new man in his final column. That was typical, always courteous and thoughtful.
Our sympathies go to Mary, his wife of 55 years, whom he married in the same church, St John’s, at Hagley Hall, where his friends gathered to say their final farewells.