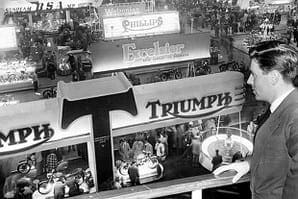 Geoff Duke opened his piece bemoaning the fact that there were ‘no drastic developments’ and most people might look back on the show as ‘average’. But he countered this gambit by discussing some of the more detailed elements at the show.

For example, how the tidier front and rear end assemblies of the Matchless and AJS models “gladdens the eye.” But suggested AMC should look at the Tiger 100 and take note how to improve the look of the oil tank, toolbox, battery and air filter compartment on its bikes.

Duke was impressed with the new Douglas Dragonfly he said: “I cannot see any disadvantage in the headlamp not turning with the front fork in orthodox fashion.”

He was impressed by the DMWs, particularly the 224cc machine. “It’s outstandingly neat,” he said, “but the interesting angle is to note what can be done to improve appearance while watching production costs.”

Components that caught his eye included the nacelle (no more expensive than a conventional headlamp and brackets) and the rear of the frame (fabricated in sheet steel) and no longer requiring specially made and expensive pressings.

But Duke was far from impressed by Vincent’s new bodywork: “My first reaction was to suggest that these mighty twins were about the last machines for styled-in weather protection. But now that various friends have harped on about the rider-fatigue aspect of wind drag at high speeds – and on the angle that Vincents appeal to connoisseur buyers, I’m not so sure. However, I do know some die-hard Vincent enthusiasts like to see the works and are weeping over the transformation that has concealed the majesty of the neatly stowed power unit.”

Duke said that the 1954 Earls Court Motorcycle Show underlined something he had felt strongly about for some time – “For as long as I have known motorcycling, the British rider has been offered the world’s most varied choice of machines.”

And far from an average event, Duke concluded: “This year’s show was brighter and more attractive than ever. May the pilgrimage to Earls Court go on for ever.”