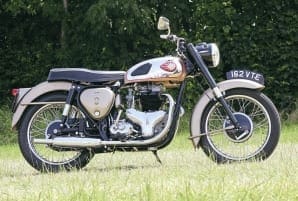 There are two equally valid ways of looking at the BSA Golden Flash.

One, and it’s the view you will most often hear being offered by Triumph enthusiasts, is that despite its polychromatic golden paint finish, the BSA is a dull, conservatively styled lump of a bike that looked old fashioned even when it first appeared in 1950.

All this is true.

The second, more objective opinion is that the A10 is in every way but one the equal of Triumph’s sexy, charismatic 650 twins. Indeed, in some respects, the BSA is a markedly better motorcycle altogether.

The one missing ingredient, and it’s a magic one in terms of making a motorcycle’s reputation, is styling.

In the 1950s and early 1960s, nothing in the world looked as lust-generating as a Triumph T’Bird, rapidly followed by the T110 and Bonneville.

By contrast, BSA’s offering appeared worthy to the point of dullness… until you look under the skin of the bike.