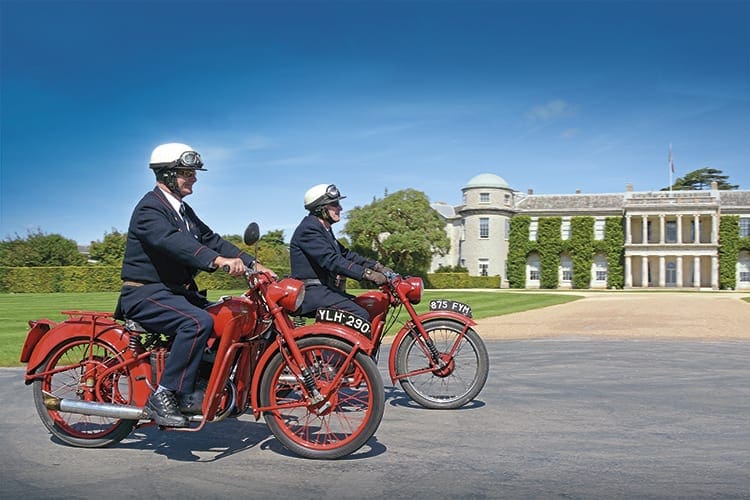 Hear the highest revs and see through the haze of blue smoke – it’s the GPO’s finest, disappearing from view, remembering great times gone yet still delivering half a century on.

‘What do you want to do when you grow up?’ It’s a question I was never allowed to answer truthfully during my mid-Seventies school years, as mother hated motorbikes.
One way to access two wheels was via the Post Office and the ‘super-cool’ vocation of the telegram boy. Freedom plus uniform and all day spent within a two-cycle mix on a bright red Bantam while getting paid for the pleasure; well that’s how I saw it.

It never happened to me but a mate’s brother joined their ranks and overnight became the most revered chap in our street. The telegram boy had become a requirement of the messaging system since dot-dot-dash first came down the wires, apart from during the First World War when the lack of home-based males meant ‘girls’ were given the unenviable task of delivering bad news.

Initially, pedal power was the propulsion most suitable in towns and became their primary working environment. The sight of a postal uniform on your doorstep was never going to be appreciated during wartime and that anxiety continued into the Sixties. For Mr or Mrs Average, a Post Office BSA at your gate represented either eight score draws or most likely another reason to dig out that black tie.

The Post Office began to utilise the motorcycle’s potential around the start of the First World War.

Fitted with bespoke sidecars, marques such as New Hudson and Douglas were converted for either delivery use or telecoms maintenance; the latter was still in its infancy.

Postwar and the abundance of army surplus machines encouraged the GPO to purchase huge numbers of vehicles, including over 2500 Triumphs alone. Although these ex-military vehicles were no doubt good value, they had endured a hard life but still gave a few years use before being replaced by new machines.

Around the mid-1920s BSA became the marque of choice and numbers of its more powerful (6hp) variants came complete with weighty side cars for carrying larger mail items and tools. Things changed again as the 1930s arrived and the Post Office considered that due to the ever increasing amount of mail being posted, the motorcycle combination was not always suited to the task, especially in rural districts. Two- and three-wheelers had proved their value in urban areas, so rather than replace the combinations, many were converted to solos just in time for the expansion of the Telegram service. Research confirmed by Paul Woods’ excellent article on the GPO’s enthusiasm for two wheels explains that in 1933 a dozen BSA 250s found a home in Leeds – to be worked by 17- and 18-year-old ‘young postman’ under the new Motorcycle Telegraph Service which quickly spread to other major towns and proved extremely popular in London.

In the early days, the environment facing your average telegram boy was almost military; strict rules on behaviour and appearance with daily inspections of kit and machine. The Second World War forced a massive increase in both postal and telegram use. While the reliable 250 BSAs were purchased in their hundreds, larger machines continued with sidecars. When peace returned the GPO flirted with powered cycles from other manufacturers (mostly Villiers two-strokes attached to a push bike frame), though the BSA continued to dominate.

The Bantam is born

War reparations meant the Allies helped themselves to some of Germany’s best designs and BSA appreciated the DKW R125, reverse engineered it and produced a legend – the Bantam.

First and foremost, the Bantam was desirable enough to boost the company’s postwar export drive around the globe, offering third world durability with minimal maintenance. It could survive the harsh terrain of the outback and took the mechanically unsympathetic learner in its stride – but its real test came courtesy of the testosterone-filled telegram boy.

December 1948 saw the GPO initially order 50 125cc Bantams complete with hardtail and leg-shields. These machines would ‘do their duty’ until 1971, after some 6000 had been abused on a daily basis travelling the UK’s roads in all weathers. Although it is often mentioned that the telegram service made little profit, figures from 1957 show they employed 1580 messengers, each one averaging around 25 deliveries per day, taking an average time of 15 minutes; one greeting telegram cost five shillings for 12 words, equivalent to a full tank of fuel in the Bantam.

Telecommunications was moving on apace and even the increased performance of the D5 Bantam and its 174cc power plant didn’t sway the preference for newer technologies. The all nationalised Post Office arrived in 1969 and after 24 years the collaboration with BSA finally ceased. The Steyr-Puch was phased in over the next decade as the Bantams were retired, and although tests were carried out with alternates from Honda and Garelli, nearly 3000 Puch MV-50s worked UK cities and major towns until 1979.

By this time the telegram had lost its importance as the phone took control, faxes followed to strike another blow but the courier market boom during the 1980s allowed Express Post to be launched. The Post Office took on a few of Honda’s CD175 and a couple of dozen GT550 from Kawasaki plus various mopeds for the London work, but the postal relationship with two wheels was over. BSA had enjoyed the best of the telegram while the telegram boy had enjoyed the best of BSA; the 125cc Bantam was and still remains ‘Post Office bike of choice’ for those who rode them.