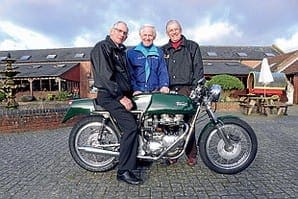 It was love at first sight. There, in a cowshed at the Bristol Classic MotorCycle Show was a Harley-Davidson V-Rod. It looked out of place amid the gleaming Brit iron. I couldn’t take my eyes off it and pushed to the front of the small crowd gathered around the Riders of Bridgewater stand for a better look.

Several months went by and the next time I rekindled my love affair was at the NEC bike show. The Harley stand bristled with updated models to celebrate their anniversary year and there, the love of my life, the Anniversary V-Rod. Somehow I had to own one; I just had to.

There was no Harley for Christmas. No surprise behind the curtains on Christmas morning, just the usual squishy parcels to undo. Socks again! ‘Bloody hell, they’re Harley socks.’ Yessssss. Yessssss. I knew it was now only a matter of time. 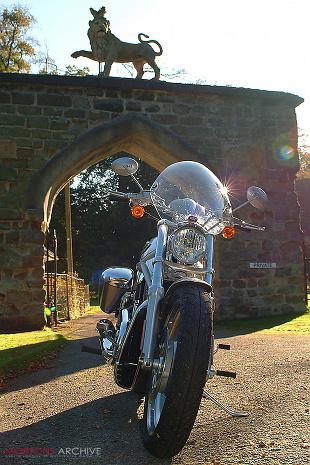 It was a wet January day in Doncaster and sales staff at the posh new St Ledger dealership had that hangdog look about them. Who the hell’s going to buy a V-Rod on a hissin’ wet day in Donny? I went through the same routine in the showroom. Lots of posturing, looking, snapping the throttle open, pulling in the levers. I even got to the point of talking to the salesman. “I think I’ll leave it today,” I whispered to the wife and made for the door.

Now, it’s not often we wash our laundry in public, if you know what I mean, but she set about me big time: “If you think I’ve ridden all the way to …’kin Doncaster on a hissin’ wet Saturday after you’ve bored the backside off me for weeks about this bloody bike and then go home without ordering the …’kin thing, then you’re sadly mistaken.” It was a severe and fairly public rollicking that I took like a man.

I mooched over to the salesman, rattling the change in my pocket. God, my dad used to do that. I was crapping myself at the prospect of spending 15-grand on a bike. “I’d like to order a V-Rod please.” My voice went up and down like a choirboy on the brink of becoming a baritone.

“It’s raining but would you like a test ride?” he said.

Better pillion seat
There’s one born every minute, I could hear the salesman muse to himself. “Would you like a better pillion seat or any extras, sir?” I was about to say no thanks when the wife breezed into the office. “Yes he does. If he doesn’t do it now, he’ll never get around to it and I’m not riding on that excuse for a pillion seat.”

I never miss an opportunity. Out came the Harley accessory catalogue… careful not to drop it on your foot… and I was away. I ended up with a Sundowner seat,  Cissy bar, sports screen and leather panniers which St Leger subsequently upgraded to hard colour-matched jobbies at no extra cost. 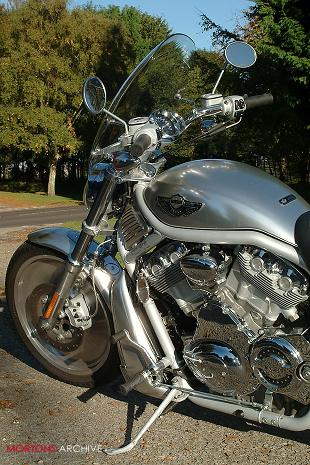 It was a traumatic gestation period waiting for the phone call to say it had arrived. Chances are, if I’d had a test ride on that wet Saturday in Doncaster, I would probably have never bought a V-Rod. My first ride out was a huge disappointment. I forced a grin when I returned home. “I love it… it’s really good.”

“What’s wrong?” she said in one of those voices.

To be honest, it took me quite a while to get used to it and the love affair has taken some time to develop. I have accepted the fact that Harleys are different, even the V-Rod. They are quirky and old-fashioned and the V-Rod is no exception. With a Harley you serve an apprenticeship. If you’re lucky you come out the other end, time-served, so to speak.

Let me tell you about some of the worst moments of my Harley love affair.

I topped up the tank (under the seat, incidentally), put on my gloves, thumbed the button and I was within a nanosecond of losing the bike through the garage window. You see, you can start a Harley when it’s in gear without pulling the clutch in and when the side-stand is down. How the hell they get away with it I will never know. I hurled myself over the bike and hit the brakes. Lesson one: always check you’re in neutral when starting.

Flat as a pancake
Lesson two: always put the bike on an Optimate or similar. The battery will go as flat as a pancake inside two weeks. I can only assume the alarm uses as much current as an electric kettle. Again, I did it the hard way. The bike stalled at a level-crossing on a busy Saturday in our market town. Into neutral, hit the button… click, click, drrrrrrr. Thank the Lord for full-face helmets. Three Italian tourists pushed me off but it was all in vain and I felt real pangs of guilt as I glimpsed one of them with his hand against a wall and his head between his knees. He was about to throw up through exhaustion. Lesson three: you can’t bump-start a V-Rod! 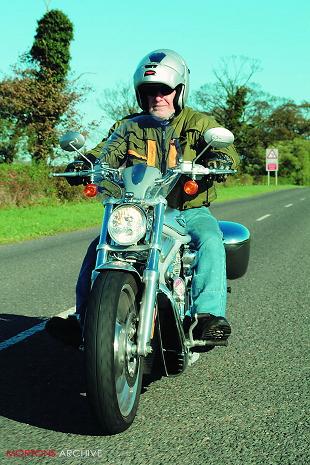 Harley fitted a brand-new battery under warranty and I quickly sent for an Optimate from ARE.

Lesson four: plan your journey. A Zippo lighter holds nearly as much fuel as a V-Rod. Eighty miles and you’re looking for fuel.

Lesson five: Don’t go for a ride in your shorts or thin trousers. The exhaust will barbecue your thigh inside five miles.

Lesson six: If you’re less than 5ft 8in you will struggle to reach the pegs without lashing out on a kit to bring them back two inches.

Lesson seven: Only go out if it’s guaranteed to keep dry. It’s a bugger to clean and I would never consider using it once the salt has hit the roads.

If I haven’t put you off yet, the best is yet to come. I agree, it’s madness that you can start it in gear, you are always looking for petrol and the panniers will carry little more than your sunglasses case, but it’s one hell of a motorbike. It turns heads, make no mistake about it. At a bike night, it stands out from the plastic missiles. It’s a toy, a bloody big toy that’ll give many of the crotch-rockets a run for their money. And that’s why I love it.

For a bike that almost qualifies for a long vehicle sticker, it handles very well. It’s far too easy to get carried away and I confess to scraping foot-pegs, silencers and the frame. Now that can be alarming and, when the frame really digs in, the back wheel is apt to step out. But, for the most part, cornering can be spirited without the need to leave a shower of sparks.

Out of the corner, snap open the throttle and the V-Rod goes like no other Harley you have ever ridden. It pulls at your arms and 100mph is on the clock in seconds. Carry on and you can get close to 140mph. It’s raw, exciting speed and you’re totally aware of every law-breaking second of it. Your arms ache, your eyes water and you quickly develop thigh muscles like a weightlifter in a bid to stop your legs being blown apart. 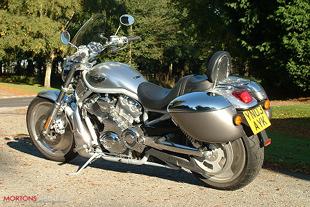 The gearbox is the best of any Harley I’ve ever ridden and the brakes are up to the job. They’re not the best but adequate and, despite the bike’s 270kg weight, you can haul it from high speeds without too much drama.

For the most part, I now ride with a grin from ear to ear. It’s a bike to ride an hour before the sun goes down on a late summer’s day.

Ideally you should be alone. Ride towards the setting sun, shades on, Arlen Ness jacket and denim jeans – enjoy. I now do it regularly. Life doesn’t get much better… it’s just taken me some time to realise that fact!