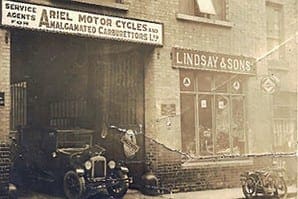 This major figure in Irish motorcycling has collected historic machines, such as the 1954 500cc Gilera ‘Saturno’ racer that once belonged to the father of 1960s Argentinian star Benedicto Caldarella. That one must be a favourite to exceed the auctioneer‘s top estimate of £12,000. A 1939 B24 BSA in trials trim may sound like another clubman’s bike, but this one was ridden in the past by not only the great Stanley Woods but also the factory’s competitions manager Bert Perrigo.

Harry was an ambitious young man and as the motorcycle scene emerged from the idle period of the Second World War, various competitions started up. In December 1945 he was second in the Newcomers’ Class of the Dublin & District Club’s trial on an OK Supreme and by 1948 won the Mount Venus Handicap hill-climb on a BSA assembled from sundry parts in his Dublin shop. By 1949 he was doing well enough to have one of the new Grand Prix 500 Triumphs and was fast enough to challenge the local stars. As his business grew, so did his ambition and when he took on the Vincent franchise for Dublin, he asked the factory if he could borrow something special for the 1953 road races in Dublin’s Phoenix Park. 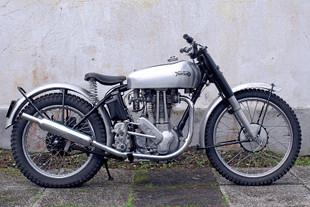 ‘Something special’ arrived, the factory’s racing development twin ‘Gunga Din,’ the fastest racing bike in the UK. Despite local ace Louis Carter’s 500 Manx being faster on the corners, the big Vincent’s speed carried Harry to a famous victory in the 150 mile race and boosted the Vincent image in Ireland.

He was an astute businessman. Long time friend Tommy Robb was riding for Bultaco in the early 1960s while Harry was doing development work on their engines. “We went down to the factory in Barcelona and Harry loved the tiled floors that were cool in summer, but really cold in the winter,” Tommy remembers. “We both admired the heaters they were using to keep the place warm, so Harry took a close look at them and brought a couple back to Ireland to arrange to have them made here. That was the Super Ser heater’s introduction to Ireland and I still have one working in the garage.”

“It was about 33 years ago Harry told me he was worried about the way land was being bought up and the lads soon wouldn’t have anywhere to run trials and scrambles. ‘So I’ve bought this bit of land that they’ll be able to use’, he said.”

“I said ‘What land is that?” and he waved his hand and said ‘This bit here’. It was a whole bloody mountain! And he told me he was going to live in the middle of it.” Which he still does, having spent time since retiring from the shop to restore a range of bikes from a 1912 Rudge-Whitworth to a 1963 Velocette Venom Thruxton Special and Italian-ware of which you may never have heard, plus oddments like a Dot off-roader fitted with a 360cc Villa two-stroke single power unit. Harry Lindsay’s taste in bikes is truly eclectic, like his range of riding and business talents. Quite a man.