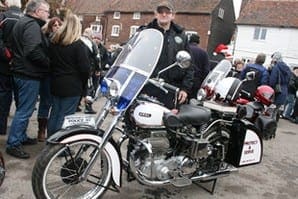 So they ‘found’ (invented?) a pair of teenagers, Mike (just 18) and Mary (17) and showed them and the readers how to prepare for a biking holiday on the new Ariel Arrow Mike had bought from Slocombes (£192).

The Craven carrier and panniers (£12 19s 6d) were apparently Mary’s brainwave, having struggled through previous biking holidays with an old rucksack on her back. Mike also fitted a Motoplas Tripoint windscreen (£5 5s) and Raydet handlebar mirror (£1 5s).

Mike opted for Lewis Leathers’ Western horsehide jeans (£11 7s 6d) together with the jacket of his Belstaff Trialmaster suit (£6 4s 6d), the trousers (£4 18s) they said would “be packed away on all but the wettest days” since the jeans had been treated with Lewis Leathertreat (5s 6d a bottle) and would keep out an hour’s drizzle.

They also packed a bed and breakfast guide (3s 6d)  – which Mike apparently found “invaluable” – and an Ilford camera (£11 19s 6d). The holiday planned was a “spot of hub and spoke touring centred on Ambleside in the Lake District”. Wonder how they got on?