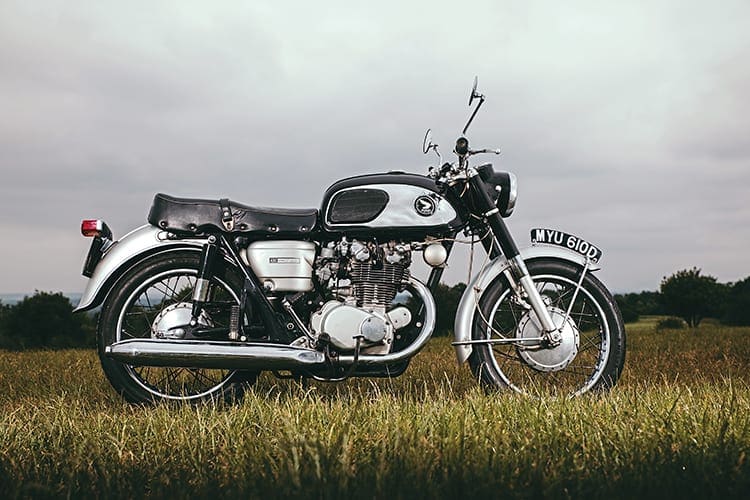 In the words of Oscar Wilde: “There’s only one thing worse than being talked about; and that’s not being talked about!” And in the biking world a similar mindset can apply. When a motorcycle is almost immediately banned from competition by the sport’s governing body you can bet your last wipe of valve grinding paste the bike in question is something special. And so it proved to be.

Back in the first half of the 1960s Honda had progressively demonstrated a worrying ability to deliver small(ish) capacity motorcycles that had an uncanny knack of outperforming much larger machines. In particular the 315cc CB77, known as the Super Hawk in the US, had embarrassed many a 500 and seriously worried more than a handful of 650s. Never shy of making capital of their achievement’s Honda even took out adverts in the press implying the CB77 would easily outrun most of the current competition. And if that wasn’t bad enough, those machines made by damn Johnny Foreigner were also proving to be unerringly reliable as well. It was very apparent to anyone who cared to monitor the progress of The Big Aitch that the company wasn’t planning on stopping at an overbored 250.

Early 1965 saw the Honda CB450 first turn its wheels in anger on British roads, totally wrong footing the press, the public and the immediate competition. There had been a quasi-expectation that the new large capacity Honda would somehow emulate the performance of the company’s Grand Prix machines but, ultimately, that wasn’t where the bike was coming from. Honda needed to show it could make a larger capacity bike that could mix it with the best and run hour upon hour, day upon day. Doubtless the firm was unquestionably capable of launching a civilianised production racer with road equipment but that wasn’t where they wanted to be, not for now at least.

The new CB450 was a 444cc twin, running double overhead cams that controlled their valves via torsion bars. And following a successful, if unorthodox, arrangement, the crank was once again configured at 180°. The set-up may have delivered an unusual engine note for a parallel four-stroke twin, but it also significantly reduced engine vibrations. Honda had proved the composition on its smaller twins and saw no reason to change now.

The all-new engine bristled with additional technology that was totally out of kilter for a traditional large capacity twin. An electric motor mounted at the front of the engine case provided disgustingly reliable starting, while a pair of 32mm Keihin Constant Velocity (CV) carburettors supplied glitch-free fuelling. The motor’s bottom end was designed to be bombproof with four roller bearings looking after the crank which was, in turn, mounted in the upper crankcase via eight studs and several alloy blocks of bearing holders. In this Honda had employed techniques learnt from racing; mounting the crank in its own dedicated holder ensured that it wouldn’t be able to able to flex the crankcases and thereby cause oil leaks. Indicative of the fact that the bike was emphatically not a racetrack refugee, Honda chose to use a pair of modestly domed pistons that ran a conservative 8.5:1 compression ratio.

The rest of the CB450’s power unit was essentially standard Honda fare with a wet sump lubrication system, gauze screen strainer and centrifugal oil filter splined to the crank. So far so good in terms of technical sophistication, but the pundits were out for blood and needed to find where the bike could be shown to be second best to the British twins it was so obviously aimed at and it didn’t take them long.

In terms of handling ability the CB450 lagged behind the products from England and Europe, yet this was hardly surprising. A reliable, oil-tight engine was a binary option – it either worked consistently without issue or it didn’t. Handling qualities, however, were a nebulous artefact based on personal preferences and decades of experience. The Japanese could master engineering quickly but handling was something they still needed to get to grips with. The CB450’s frame was a mixture of tubes and metal pressings that, at first glance at least, looked like it should have worked, yet too many assumptions had been made at the design stage. The central seat post wasn’t directly connected to the swingarm pivot points and these weren’t significantly braced. The headstock was triangulated via a press metal brace attached to the front downtube and the upper frame rail, yet it all looked as if Honda had run out of money when it came to the chassis. And this probably wasn’t too far from the truth either. Loss of face in Eastern cultures is a huge social taboo so the mindset was obviously to design a reliable an engine that never breaks down – then spend what’s left on the frame. With R&D time being expensive yet steel being relatively cheap, the Honda’s frame was a chunky beast and it, allied to the rest of the bike, ensured the CB450 was heavier than a contemporary Bonneville!

It would appear that Honda themselves never gave the CB450 any other names and any monikers it did receive were pinned on it by Honda’s overseas sales teams. Allegedly, Honda UK gave it its most famous name with an advert in the Motor Cycle that read… “meet the big Black Bomber”. Elsewhere it was nicknamed the Dragon and supposedly marketed in Canada as the Hellcat!

In the UK at least, the CB450 received a lukewarm reception and especially so given that its purchase price was worryingly higher than a tricked up, brand new, 650 twin from the West Midlands! And yet those that bit the bullet and opted for the Honda rarely lamented their decision. Once they overcame their natural reticence to rev the engine hard they were rewarded with a machine that took off above 6000rpm and delivered its power in a manner unlike little else up to this point.

Once into its stride, and totally unlike the traditional 360° twins, the Honda actually got smoother the harder it was worked. Up at the top of its rev range its motor could get just a little buzzy but US racers soon sussed that one out by removing the top engine mount. Thus modified and regularly serviced, the CB450 remained fast, smooth and unerringly reliable.

Sales of the CB450 in the UK never reached the levels that Honda might have expected, but perhaps that’s simply down to the British being, by that point, fed up to the back teeth with parallel twins, regardless of how good they might have been. Arguably, the bike might have garnered a better following if it had achieved some significant racing successes. Honda knew well enough the old adage – win on Sunday, sell on Monday and that might very well have swung some sales their way, had the ACU not effectively banned the bike.

Mike Hailwood had been signed to race a CB450 at the Brands Hatch 500-miler in 1966 but the Auto Cycle Union took exception to the double overhead cams and torsion bar valve springs. To this day the decision is still a controversial one and many suggest it was an overtly protectionist measure aimed at ensuring the homespun bikes wouldn’t be made to seem lacking. A few years on the powers that be finally relented and the Bomber would go on to win the 1969 and 1971 Production TT titles with a Suzuki T500 splitting the Hondas in 1970.

If the CB450’s sales were only so-so in Blighty, over in the US the bike rapidly became a favourite once it had been revised from the rather staid looks of the launch model. Just a year or so into its life-cycle the bike received a much-needed fifth gear. Other than the later addition of a disc brake and year-on-year cosmetic changes, the bike remained on the books until 1974, when it was replaced by the controversial and arguably significantly less meritorious CB500T.

Unwilling to overbore the engine, Honda increased the stroke by some 7mm, while at the same time reducing the compression ratio. Quite why Honda persisted on running with a design that was now a decade old seems odd to say the least. The original bike had been built to demonstrate Honda was capable of making larger capacity machines and the traditional parallel twin was the natural choice. However, within just a few years of the bike’s launch Honda themselves totally outclassed their own flagship with the CB750/4. And then they compounded the felony by launching the CB500/4, which did everything the 450 twin did but faster, lighter, smoother and easier. When the press of the day decided that the 500/4 was arguably Honda’s best bike to date it’s frankly amazing that the CB450’s design lasted until 1976.

So, if our overview of the CB450 apparently highlights the bike’s deficiencies and shortfalls, why might you want one now? That’s easily answered! Little from Japan of that age impresses quite so much as a half-decent Bomber. For starters the exhaust note is something else, as is the way the engine picks up speed and gets into its stride. If your expectation of a parallel twin is torque and power at the expense of vibration then you’re in for a real treat – open the taps and marvel at just how well the old girl picks up her skirts and gets a wiggle on. And that dodgy handling? Yes, for sure the big Honda twin is no Triumph T100, but neither is it the clown bike some would say it is. Even now it feels planted, predictable and safe. Yes, it may well be overweight but the mass of early Japanese machines also means they don’t tend to get thrown off course.

And it gets better because time has delivered decent rubber for the Bomber. Those potentially lethal Japanese tyres have long been replaced by decent black hoops that dramatically enhance the ride quality.